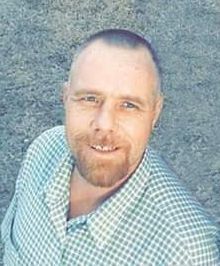 Terry Lynn Russell departed this life on Sunday, May 24, at the age of 46 years, four months, and 26 days. He was born in Shelby, Mississippi on Dec. 28, 1973, the son of Judy Russell Stewart.
Terry was self employed and enjoyed fishing, carpentry work, cookouts, and spending time with his family. He was fun and had an outgoing personality and was very optimistic.
In addition to his mother, Judy Russell Stewart of Savannah; Terry is survived by his children, Morgan Cox of Mt. Vernon, Washington, Terry Russell, James Russell, Susan Russell, Jessica Russell, Samantha Russell, and Kason, all of Savannah; grandchildren, Skylen Cox, Luna Cook, Emma Russell, Ethan Russell, and Summer Russell; and a brother, Bobby Sexton of Savannah.
Terry was proceeded in death by his grandmother, Mable Russell.
Services were held on May 29, at 3 p.m. at Christian Assembly United Pentecostal Church in Adamsville, Tennessee, with Phillip Johnson officiating.