Shiloh National Military Park is hosting three days of events over Memorial Day weekend.
The events and programs will honor and remember the nation’s fallen heroes and celebrate the unofficial beginning of summer. 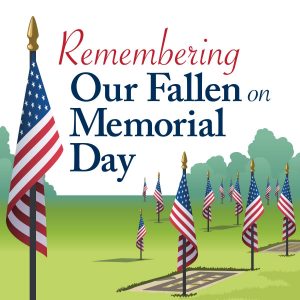 “The sound of cannon fire will again rumble across Shiloh battlefield throughout the weekend of May 28 and 29,” announced park Superintendent Allen Etheridge.
On Monday at 11 a.m., Shiloh Park hosts its annual Memorial Day observance ceremony in the Shiloh National Cemetery. The service includes music, patriotic salutes, and the laying of a wreath on the grave of an unknown soldier.
“Memorial Day is a day for remembering all the people who have died while serving in our country’s armed forces,” Etheridge noted.
Originally known as Decoration Day, it began after the Civil War to commemorate the soldiers who died in the war.
“We are pleased to once again be able to invite everyone to commemorate our fallen heroes,” said Etheridge.
This year’s keynote speaker is Lt. Col. Vicki Ball (retired) from the United States Air Force. She retired from the Air Force in 2010 following a 23-year career as an active duty Nurse Corps officer.
The National Park Service said her assignments included tours of duty in Mississippi, Alabama, Florida, California, Nevada, Georgia and Washington, DC. In 2004, she deployed to Tallil Air Base, Iraq, in support of Operation Iraqi Freedom where she served as the chief nurse of an expeditionary medical group leading a team of nurses and medical technicians in caring for injured airmen, soldiers, and civilians.
She is currently an associate professor and the interim dean of Nursing at Charleston Southern University in Charleston, South Carolina.
Following the cemetery service, ranger-led programs will be offered on the battlefield. The service and all park programs are free and open to the public.
On Saturday and Sunday, park volunteers dressed in period uniforms will present cannon firing demonstrations in the open area south of the park’s visitor center.
The Shiloh cannon crew will be firing a reproduction 6-pounder field piece and introducing visitors to the proper drill, ammunition, and equipment used by Civil War artillerists.
“These period correct firing demonstrations allow the public an opportunity to use their imaginations and visualize the immense destruction a cannon could deliver,” said Etheridge.
Of the 246 cannon in the Battle of Shiloh, 96 of them were 6-pounders, making them the most common big gun on the battlefield.
On Saturday there will be four demonstrations, at 10 a.m., 11:30 a.m., 1:30 p.m. and 3 p.m. On Sunday, there will be three demonstrations, at 11 a.m., 1 p.m. and 2:30 p.m. Each demonstration lasts about 20-minutes and includes two cannon firings. All demonstrations are free and open to the public.