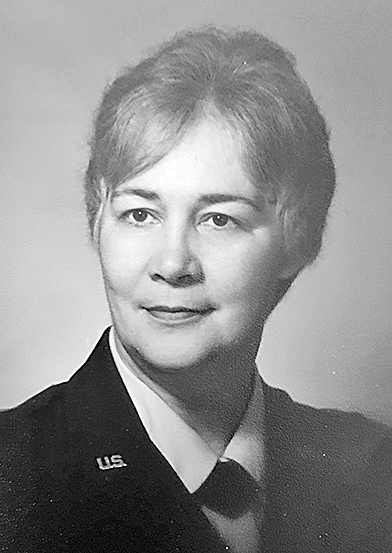 Jackie Lou Northcutt Fremming took her final flight to her heavenly home on Monday, Feb. 28.
She was born in Hayti, Missouri, Oct. 10, 1941, but moved to Tennessee early in life. After graduating Baptist Hospital Nursing School in Memphis, she moved home to work at Hardin Medical Center in Savannah.
In 1972, she left her beloved river town to join the United States Air Force. She was commissioned as officer in the Nurse Corps. Over the next 20 years, she had stateside assignments in California, Illinois, Texas and Alaska, where she met her husband, Air Force pilot Lt. Col. Donald J. Fremming (deceased).
Her overseas deployment included the Far East during the Vietnam war. She was selected for Flight School and after receiving her flight nurse wings, she flew aeromedical evacuation missions transporting patients from the Philippines. She was part of the significant and historic “Operation Babylift” from South Vietnam to the United States in 1975.
She pursued both professional military education and formal education while serving her country and working full-time. She earned a bachelor of science degree from McKendree College in Illinois and was a life-long learner. Her military decorations and awards were many. Major Fremming’s final assignment was at Wilford Hall USAF Medical Center in San Antonio where she retired in1992. By this time, she considered herself a Tennessee-Texan loving both places and the people and calling both “home.”
After retirement, she and her husband traveled and spent their years together still helping others. Her volunteerism extended to many organizations including Sacred Music, Inc; Grace Point Church; Altrusa International of San Antonio; Alamo Chapter of Society of Air Force Nurses; and San Antonio Public Library. She was a life-time donor to the Tennessee Baptist Children’s Home and Samaritan’s Purse.
Jackie’s belief that giving is a blessing is summed up in 1 Chronicles 29:14 NIV. She devoted her life to always helping; to spreading joy and laughter; and to feeding as many as she could possibly get around a table. She leaves behind a legacy of dedication and love for family and the many friends she made along her life’s journey. Jackie lived with a giving and grateful heart.
She is survived by her only brother, Robert “Butch” Northcutt (Debra); and family including Brad (Lacie), Elijah Northcutt, Chad (Carrie) Emilie, Sophie & Millie Northcutt, Dianne Fremming King, Spencer and Calvin King, Donna Fremming Contreras, Jennifer and Sofie Contreras.
Jackie was preceded in death by her husband, Donald J. Fremming; son, David J. Fremming; and her parents, Irene Russell Northcutt and Jack Northcutt.
In lieu of flowers, memorials in honor of Major Jackie L. Fremming may be made to the Military Women’s Memorial or the Darryl Worley Foundation designating the Cancer Treatment Center. Sympathy cards should be addressed to her brother: Robert “Butch” Northcutt, 150 Jade Road, Savannah, Tenn. 38372.
Services will be held Friday, April 8, at Mission Park Funeral Chapel, at 9:30 a.m. and burial with military honors to follow at Fort Sam Houston, San Antonio, Texas.