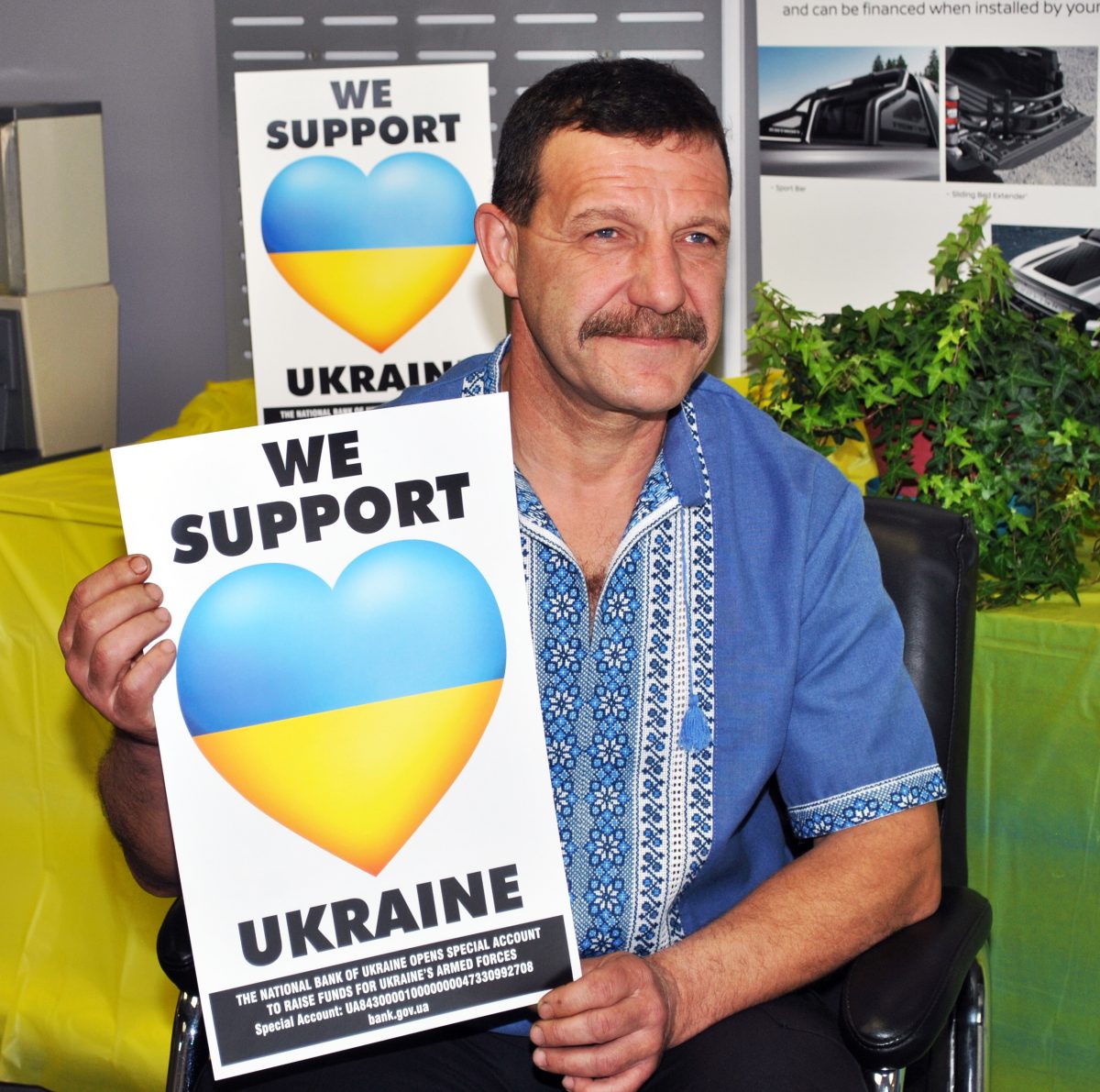 Ruslan Kucherenko, who works at Jones Nissan in Savannah, asks Tennesseans to consider donating a single dollar to help Ukrainians in this difficult moment.

As Russian forces began setting up military pressure on Ukraine in February, Ruslan Kucherenko, who has lived in the United States for 16 years and works as a lube tech at Jones Nissan in Savannah, started making plans to return to his home country.
Kucherenko, who said he served in the Ukrainian Army for 22 years, felt he needed to be in the country of his birth to help protect his family and others. He has a sister, brother-in-law, niece and nephew in Ukraine.
“After seeing the news on Feb. 24, I talked to my sister and told her I’m looking for a ticket to go to Ukraine,” said Kucherenko on Friday. “She said, ‘Don’t come. Stay where you are and try to help us.’”
Every day for the past week, his sister is going into a shelter because of bombing.
“Every day Ukrainian Army are dying. Every day kids are dying. I worry if my nephew in the army is still alive,” said Kucherenko.
Kucherenko, who has a daughter and grandchild in the U.S., said that “while children in America are playing video games, kids in Ukraine are sitting in shelters counting how many Russian bombs are blowing up.”
Clearly moved, Kucherenko describes his feelings. “At night it’s a bad time. My breathing goes slow, then my heart starts knocking faster and faster. I sleep only two or three hours. I keep getting up to check the internet.”
Kucherenko is not asking for large donations from anyone.
“What is one dollar?” asks Kucherenko. “I ask you to put your hand on your heart. Think of $1 when you drink a cup of coffee or drink a bottle of beer after work. Many people in Ukraine are sitting in basements and have no water, no food. Soldiers need weapons. Bring your single dollar to save a life in Ukraine. If possible for you to give, I would be very appreciative.”
Kucherenko recalls the history of Tennessee as the Volunteer State.
“Volunteers is the right name for Tennesseans. I believe this generation, like their ancestors, will help,” said Kucherenko. “We are together in this. If we don’t stop the Russian devil, no one knows who will be next. God bless you as you help those in Ukraine in this difficult moment.”
National Bank of Ukraine has set up special accounts to help their nation. To donate online, go to National Bank of Ukraine and click on “Help Ukrainian Army” or “Humanitarian Assistance to Ukrainians.”