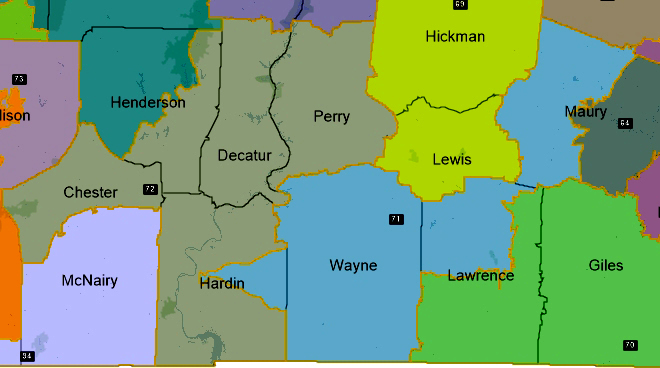 If the current redistricting proposal advanced by the state House of Representatives committee is adopted by the General Assembly and signed by the governor, Hardin County will be split into two state House districts.
Hardin County is currently in Tennessee House District 71, which includes Wayne, Lewis and the northwestern part of Lawrence Counties.
The proposed redistricting map, passed by the House Select Committee on Redistricting, would result in what looks to be a pie-shaped wedge starting at a point in Savannah and growing larger as it moves eastward toward and past the Wayne County line, with that wedge remaining in the newly-drawn District 71.
The rest of Hardin County, everything outside the wedge, would be in the newly-drawn House District 72.
“I don’t care for it at all. It’s not a whole lot of separation for Hardin County, but it looks like it comes down U.S. 64 like it takes out Olive Hill and maybe part of Savannah – I don’t think all of it,” said current Representative for District 71 David Byrd (R-Waynesboro) in an interview.
He added, “My understanding is that west Tennessee lost so much of its population they had to move districts toward the middle. As soon as we get back in session in early January, it’ll go for a full House vote pretty quickly – I’ll be voting no.”
Byrd’s term ends next year, and he told The Courier  he is not running for reelection for health reasons. He suffered extremely serious complications from COVID-19 over the past year, requiring lengthy hospital stays and rehabilitation.
As for the proposed redistricting plan, Byrd noted, “I’m sure it’ll be hard for it not to pass. There’s probably 55 to 60 representatives whose districts the changes in the new map doesn’t touch, and they’ll probably vote yes because they’ll be afraid a different plan might mess up their districts.”
Close boundary details have not been published by the House Committee, but when the published map – which does not include marked roadways but only geographic features – is laid over a map of Hardin County, the pie wedge that will be cut out to form a new District 71 becomes a little clearer.
It appears that the northern-most edge runs west down U.S. 64 to a point near Tenn. 128, jogs south to about Walkertown, then runs northeast in a jagged line to approximately Tenn. 203, and follows Tenn. 203 back east to Wayne County.
In short, the newly-drawn District 71, if passed, appears to approximately split Savannah-proper in half, with the southeast half remaining in District 71. The district would also include all of Wayne County and about one-third of Lawrence and one-half of Maury counties.
All of Hardin County outside that wedge, including what appears to be the northwest portion of Savannah, would be included in the newly-drawn District 72. District 72 would also include Chester, Decatur, and Perry Counties, as well as about half of Henderson County.
“I do not like the proposed redistricting plan to split the county into more than one district. I think it makes it harder to work with the legislators when you work with more than one, and it’s confusing for people,” said Hardin County Mayor Kevin Davis.
Redistricting occurs after every national census, to rebalance districts that have shifted in population numbers.
The U.S. and Tennessee constitutions require that representative districts be apportioned by as equal numbers of citizens as reasonable, allowing for a small variance.
The General Assembly is responsible for drawing state House and Senate as well as federal House district maps in the state, with each chamber drafting its own and a proposed federal House map for consideration. After they come to an agreement on the three maps, they are sent to the Governor for signature or veto.
For the upcoming election cycle in 2022, the deadline for new district maps to be drawn is April 7. The full House will be considering the map proposed by the House committee shortly after it reconvenes on January 11.
No proposed maps for state Senate nor federal House districts have been voted on, although all of the currently published proposed new district maps for state Senate leave Hardin County intact.
Between the 2010 and 2020 census, the population of Tennessee grew by 8.9%, from 6.34 million residents to 6.9 million residents.
With the Tennessee House of Representatives having 99 districts, that means each district has an ideal target population of 69,806 citizens, up from 64,102 per district after the 2010 census.
However, that population growth has not been uniform through the state. Western and eastern Tennessee have lost population growth, while middle Tennessee has experienced a population boom.
To balance districts so each of the House’s 99 districts will have close to an equal number of citizens, districts have been squeezed toward Nashville in Davidson County and its surrounding counties.
There are also claims that the new House redistricting plan has political aims as well.
The General Assembly, which has a Republican supermajority in both the House and Senate, has formed redistricting committees for the House and Senate comprised of mostly Republicans.
In an in-depth analysis completed by The Tennessean, the newspaper noted, “The map… would lump nine Democratic incumbents in urban areas such as Nashville, Knoxville and Memphis in four districts,” and result in the elimination of seats held by five Democratic Party incumbents facing reelection in 2022.
The paper also noted that six Republicans are paired together under the new district lines, although two of the lawmakers already announced they will not seek re-election in 2022.
Hardin County Administrator of Elections Jeanette Cronise says she is also displeased with the proposed House district map.
“I’m not happy about it – whenever you have split counties it makes it really hard. If this passes, we’ll have to change our address index and we’ll have to print multiple ballot styles, to account for different candidates in each new district in the county.”
Cronise noted that new county districts and voting precinct maps have already been approved, and the proposed new House district map will have no bearing on county, local or municipal races.

Ed. note: This story was first published in the Dec. 23 print edition of The Courier.