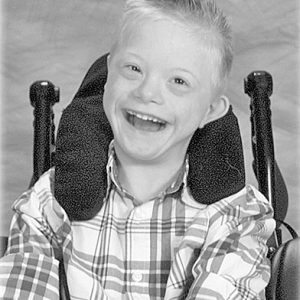 William Ellis Hanna, of Savannah, was born in Jackson, Tennessee on June 7, 2010, welcomed into the world along with his twin sister Zoe by his parents John and Ginger.
In many respects, Will was your typical pre-teen. He loved eating, especially ice cream; the flavor didn’t matter as long as it had chocolate all over it. He enjoyed riding four-wheelers and UTVs, (even though his granddad had to hold him), being outside and traveling. And music played a great role in his life, although his preferred favorites of Contemporary Gospel and Christmas songs might have set him apart from other 11 year olds. He was a sixth grader at Hardin County Middle School through their homebound program and sometimes attended church with his mother at the House of Mercy.
Although Will’s physical condition limited what he could do, it also allowed him to experience great joys in life that other boys his age may never know. He watched “Wheel of Fortune” every afternoon, but his poor eyesight made it difficult to see the T.V. clearly—so he listened every time a contestant spun the wheel because he loved hearing the clicking sound it made. He loved his twin sister dearly and she returned that love without reservation. She would play with him for hours and as long as he was close to her, he was content. Of course there were favorite toys, among them his stuffed animals and his light-up music box—simple things that gave him years of pleasure. Will had a special bond with his grandmother “Mimi” and enjoyed shopping trips with her and his mother. And hugs and kisses . . . Will was always ready and willing to be covered with both.
Will unexpectedly left his family and friends on Friday, Nov. 12, 2021 at the tender age of 11 years, 5 months and 5 days.
He left behind his parents, John and Ginger Hanna and his twin sister, Zoe Grace, all of Savannah; his grandparents Maxie and Debra Briley and Yvonne Hanna, also of Savannah; his uncle Quinton Hanna of Savannah and his aunt and uncle Mary and Robin Gibb of Farnborough, U.K., his aunt Jenny Briley and his uncle Octavio (O.T.) Baez of Jacksonville, Florida; and his cousins Alistair, Charlie and Lucy Gibb.
He was preceded in death by his grandfather Sam Hanna.
Will Will, as his family lovingly called him, was a happy child whose expectations in life were very few, and whose delight in the simple things of this world will be missed terribly by those who were privileged to share his brief time on this earth. For those who wish to honor his memory, donations may be made to the Down Syndrome Association of West Tennessee.
Services were held on Friday, Nov. 19, at 1 p.m., at Shackelford Funeral Directors of Savannah with John Robinson, David Weatherford and A.J. Fowler officiating. Burial followed in Bethel Cemetery at Savannah.