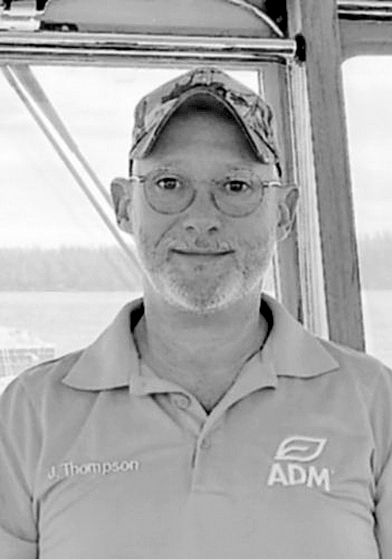 James Edward “Hoss” Thompson Jr., of Michie, departed this life on Sunday, Nov. 7, at the age of 56 years, 3 months and 8 days.
He was born in Hardin County on July 30, 1965, the son of Mary Gale Young Thompson and the late James Edward Thompson Sr.
James Edward “Hoss” worked with American River Transportation Company (ARTCO) as a boat captain, he was with the company for 38 years. Riding his Harley-Davidson, fishing, hunting and camping were some of his favorite pastimes. James enjoyed spending time with his girls and crawfish boils were one of his favorite hobbies. He was a fan of Tennessee Vols, Tennessee Titans, and NASCAR Racing’s Kyle Busch. He was known for saying “I ain’t got many friends, but I got a few” and “It’s hammer time.”
James Edward “Hoss” Thompson Jr. is survived by his daughters, Fallon Chasity Thompson and her partner Ronald Franks of Savannah and Heather Lauren Thompson and her fianceé Teresa Whitman of Michie; mother, Mary Gale Thompson of Savannah; grandchildren, Rhett Gibson and Bella Whitman; sisters, Janet Vaye Copeland and her husband Steve of Ft. Myers, Florida, Deborah Kay Young and her husband Donnie of Savannah and Patricia Gale Littlejohn and her husband Gary of Iuka, Mississippi; uncle, Raymond Earl Young of Stantonville; mother of his children, Tammy Dees and her husband “his husband in-law” Dale of Counce; in-laws, Gary and Linda Austin of Counce; cousin and best friend, Earl Young of Adamsville; and honorary godsons, Bryson and Hayden Milender, both of Counce. He is also survived by a host of nieces and nephews, his fellow tow boaters, his beloved Childers Hill family, and his grand dogs.
In addition to his father, James Edward “Hoss” Thompson Jr. was preceded in death by a nephew, Christopher Brent Littlejohn; maternal grandparents, James Wesley and Mattie Belle Young; and paternal grandparents, John Albert and Cleo Thompson.
James Edward “Hoss” Thompson Jr. was a donor with Tennessee Donor Services of Nashville.
Celebration of life memorial visitation was held Saturday, Nov. 13, at Shackelford Funeral Directors in Savannah from 1 p.m. to 5 p.m. for friends and family.