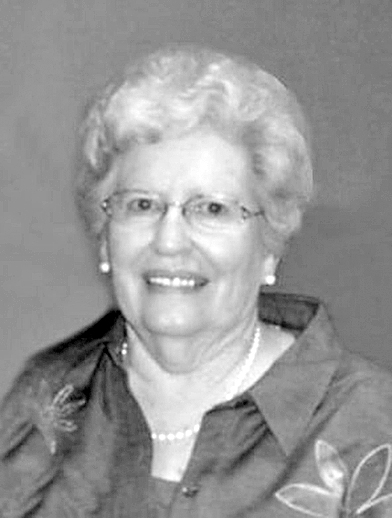 JoAnne Ross Powell Jones, of Savannah, formerly of Milledgeville, departed this life on Monday, Oct. 25, at the age of 88 years, 6 months and 28 days.
She was born in Chester County, Tennessee on March 27, 1933, the daughter of the late Arzie Dee Ross Crowell.
JoAnne was united in marriage to James Mackey Powell on Nov. 8, 1952, and they made their home in Milledgeville, where they raised their three children, Gary, Jimmy Michael and Melinda Ann. She loved her family and, as it grew, she loved her grandchildren and great-grandchildren. She enjoyed flower gardening and traveling. JoAnne was a member of Milledgeville Methodist Church, past Sunday school teacher – ladies class, past treasurer and an Eastern Star.
She and James were married for 51 years when he preceded her in death on Dec. 31, 2003. JoAnne later married Elbert C Jones Jr. on Nov. 26, 2005. They would have been married 14 years when he passed away on Oct. 10, 2019.
JoAnne started her career at the Post Office in Milledgeville as a clerk, a position she held for 15 years. She transferred to Jackson, Tennessee for four years, and was then moved to Darden, Tennessee and promoted to Postmaster. JoAnne was at Darden Post Office from 1984 until 1988, when she transferred back to her hometown of Milledgeville. She stayed in Milledgeville as Postmaster until her retirement in 2005. JoAnne enjoyed her time working at the Post Office and getting to see everyone daily.
JoAnne is survived by her son, Gary R. Powell and his wife Diane of Savannah; stepdaughters, Jeanne Mask of Bolivar and Janet Humphreys and her husband Anderson of Rossville, Tennessee; brother, Bill W. Ross of Jackson, Tennessee; granddaughter, Amber Powell Brock and her husband Nick; step grandchildren, Ian Wellons and his wife Amanda, Daniel Hamer Jr. and his wife Alyssa, and Rachel Wellons; great-grandchild, Alexis Nicole Brock; step great-grandchild, Kate Wellons; and daughter-in-law, Darlene Powell of Lexington.
She was preceded in death by her mother, Arzie Dee Ross Crowell; first husband, James Mackey Powell; second husband, Elbert C. Jones Jr.; son, Jimmy Michael Powell; daughter, Melinda Ann Powell Bobo; and sister-in-law, Ann Truett Ross.
Services were held on Wednesday, Oct. 27, at 11 a.m., at Milledgeville United Methodist Church with Robert Conder officiating. Burial followed in Milledgeville Cemetery.
Memorial donations can be made to Milledgeville United Methodist Church, 57 Main Street, Milledgeville, Tenn. 38359.