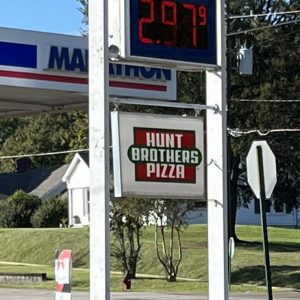 The price for regular unleaded at a Savannah fuel station Monday afternoon was nearly $2.98 per gallon.

For the second week in a row, the Tennessee gas price average saw a double-digit increase week-over-week.
Since Oct. 11, gas prices across Tennessee have risen 10 cents as of Monday, on average. The Tennessee gas price average is now $3.12 which is 22 cents more expensive than one month ago and $1.18 more than one year ago.
“Compared to the price of gas a year ago, it now costs consumers about $17 more to fill up their vehicles,” said Megan Cooper, AAA – The Auto Club Group. “Unfortunately, it doesn’t look like drivers will be finding relief at the pump any time soon. Global supply concerns continue to keep upward pressure on the price of crude oil, which is now closing daily above $80 per barrel.”
Quick facts
•24% of Tennessee gas stations have prices below $3.00
•The lowest 10% of pump prices are $2.93 for regular unleaded
•The highest 10% of pump prices are $3.35 for regular unleaded
•Four metro areas saw double-digit increases in their metro averages over last week: Cleveland (+ 17 cents), Nashville (+15 cents), Chattanooga (+ 14 cents), Clarksville (+ 12 cents)
National gas prices
The national average for a gallon of gasoline rose a nickel over the past week to hit $3.32. The primary driver of this surge remains the cost of crude oil, which is now closing daily above $80 a barrel. In August, the price of crude was in the low $60s per barrel.
According to new data from the Energy Information Administration, last week’s total domestic gasoline supply fell by 2 million barrels to 223.1 million barrels. Gasoline demand also fell from 9.43 million barrels per day to 9.19 million barrels per day, but the agency calculates it is still some 610,000 barrels per day above last year.
Typically, softening demand should result in some easing of pump prices, but the higher cost for crude is blocking this. With oil prices remaining elevated, pump prices will follow suit because the cost of crude oil accounts for more than half of the price of each gallon of gas.
Forecasts from the International Energy Agency for more robust oil demand, especially heating oil this winter, are also keeping crude oil prices elevated.
Monday’s national average of $3.32 is 13 cents more than a month ago, $1.16 more than a year ago, and 67 cents more than in 2019.
Tennessee regional prices
Most expensive metro markets – Nashville ($3.17), Cleveland ($3.16), Johnson City ($3.12)
Least expensive metro markets – Jackson ($3.09), Morristown ($3.10), Clarksville ($3.10)