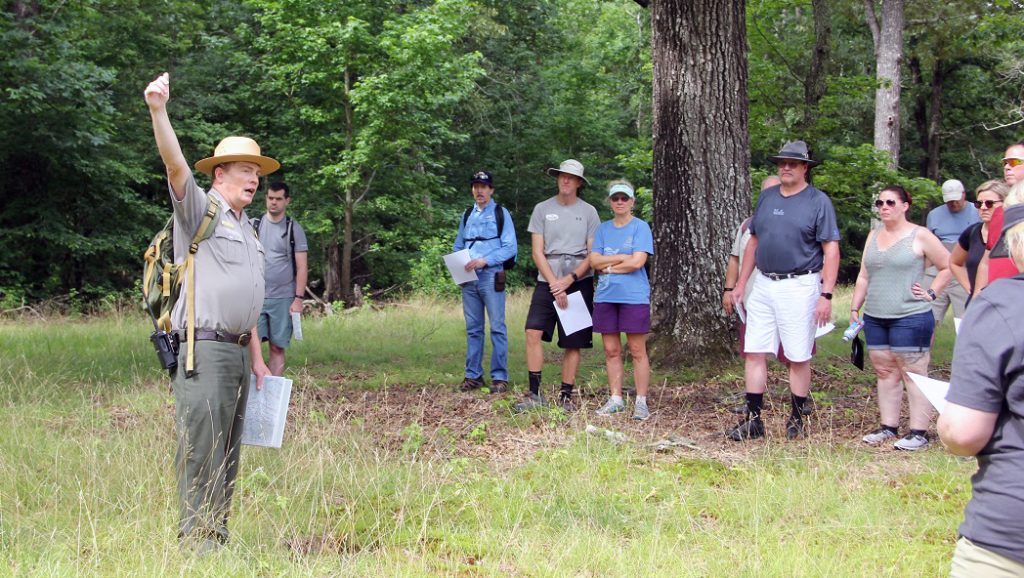 A park Ranger leads a group on a hike.

Shiloh National Military Park announces a series of Saturday morning ranger-led hikes on the battlefield.
Each hike takes about two hours and covers a different sector and story of the battlefield.
On Saturday, Oct. 9, the hike will be “The Union Center and the Hornets’ Nest.”
Join Park Ranger Timothy Arnold for a short hike to learn about the severe fighting in the famed “Hornets’ Nest” of Shiloh.
This hike will discuss the establishment of the area as a Union defensive position, units involved, small arms weapons and artillery used, as well as the truth versus the myth of the life and death struggle in this area. Learn about the Confederate attacks led by Col. Randall Gibson’s Brigade, the leadership of Generals W.H.L. Wallace and Benjamin Prentiss, and the fate of each officer.
This hike will meet at Tour Stop 10 (Hornets’ Nest) and be two miles in length. The terrain is moderate, passing through thick woods and crossing small streams.
On Saturday, Oct. 16, the hike is called “Crittenden Pushes the Center.”
Gen. Thomas L. Crittenden’s 5th Division of General Don Carlos Buell’s Army of the Ohio was the center of the Union line as it began its counterattack on April 7th, 1862.
To the troops fighting their way through the center of the battlefield that morning, the severity of the previous day’s combat became readily apparent. When the Union Division commanded by General Thomas Crittenden approached the dense thicket, which the day before was dubbed, “The Hornets’ Nest”, they ran into very heavy resistance. Over several hours of fighting the Union advance ground to a halt.
Ranger Arnold will provide a glimpse into the division’s advance, as they attempted to negotiate the tangled wilderness of the Hornets’ Nest and drive the enemy from the Daniel Davis Wheat Field and the Hamburg-Purdy Road, where it halted as the battle drew to a close. Hikers will meet at Tour Stop 2 (Confederate Monument). Distance of the hike will be two miles over moderate terrain.
The final hike on Saturday, Oct. 23, will be “Slaughter in the Ravines: Stuart’s Brigade at Shiloh.”
Follow Ranger Arnold and trace the actions of Col. David Stuart’s Brigade as they attempted to protect the entire Union army’s left flank against General James Chalmers’ overwhelming infantry and artillery for several hours. Learn about their struggle, weapons, and adapted tactics as you walk the terrain where this action occurred. Also, learn about the “hard luck” 71st Ohio Infantry Regiment and the controversy surrounding their actions at Shiloh.
Hikers will meet at the Tent Hospital Site (Tour Stop 16). The distance will be about 1.5 miles over moderate terrain.
Each hike begins at 10 a.m. Space is limited, so call the park’s visitor center at 731-689-5696 to pre-register.
All hikers should wear appropriate clothing and footwear for the weather and terrain and to bring water. Insect repellent and sunscreen is also recommended. Rain and lightning will cancel the programs.