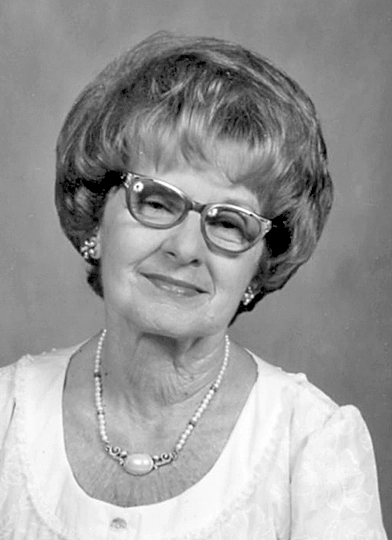 Notice: Due to the current COVID surge, there will be no visitation or service. In lieu of flowers, please send memorial donations to First Baptist Church, 145 Main Street, Savannah, Tenn. 38340.
At the age of 90 years and 2 days, Mary Elizabeth “Betty” Doran, of Henderson, Tennessee, formerly of Savannah, was freed from her earthly prison of Alzheimer’s, blindness and other health issues to enter the heavenly realm of eternal life on Tuesday, Sept. 21, at Henderson Health and Rehab.
Betty entered this world in Nashville on Sept. 19, 1931, the only child of John Brown and Hattie Boyd Doran. She was a studious, talented and kind Christian lady who loved animals, music, reading, catching as many sunshine rays as possible to maintain her tan, anything chocolate, going out to eat, helping others, and being a part of First Baptist Church of Savannah.
Betty was a 1949 graduate of Central High School, where she was class valedictorian in a class of 74. Always having the dream to be a social worker, she enrolled at Union University; however, the sudden death of her father dictated that she work her way through school, so she transferred to and obtained her B.S. degree from Memphis State in 1956. She continued her schooling, and received a Master of Science in social work from the University of Tennessee in 1959. After 35 years of service with the Department of Human Resources, she retired, but continued to work for a home health service. Along the way, she obtained her real estate license, taught real estate classes, and built houses and apartments. All of her accomplishments were in spite of visual limitations from birth, and many years of taking care of her mother, also a victim of Alzheimer’s, which Betty described in a 1985 Courier article as “The Long Funeral.” Little did she know she would have her own long funeral.
Betty is survived by two special cousins, Joyce Anderson of Waynesboro, and Clara Ruth Holt (Marion) of Henderson.
A private burial will be held at Philadelphia Baptist Church in Waynesboro.