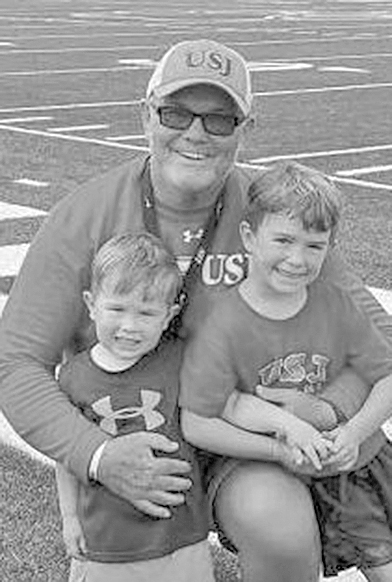 Tommy Browder was born June 3, 1951, in Selmer, the son of Dortha Walker Browder Naylor and the late Bill Browder.
Mr. Browder graduated from University of Tennessee at Martin with Bachelor of Science degree in education. His coaching career spanned over 35 years and began at Michie Elementary School in the early 1970s. While at Michie, he coached football and girls softball. He landed his first head coaching job at Adamsville High School, he coached from 1977-84. From 1985-1988, he crossed the river to be the head coach at Hardin County High School. He came home in 1989, to coach at McNairy Central High School for the next 20 years (1989-2008). His record at MCHS was 142-82; he was inducted into the McNairy Central Sports Hall of Fame in 2018. He left Tennessee to coach in Long Beach, Mississippi, for three years (2009-2011) before retiring. After a short retirement, Coach started back in Scotts Hill (2015-2016) as offensive coordinator and has been at USJ since 2017 as offensive coordinator. He was passionate about the game of football and making a difference in the lives of the young men he coached.
As much as he loved football, he also loved Elvis. His Elvis impersonations began with the yearly production of Hee Haw. He would perform at local festivals, charity events, and even made it to the finals in Branson, Missouri. His voice and likeness of Elvis brought many smiles and laughter to his audiences.
Mr. Browder enjoyed traveling to the beach, cheering on the St. Louis Cardinals and Ole Miss Rebels. He exercised regularly often running six miles before school and participated in marathons.
Mr. Browder departed this life on Wednesday, Sept. 15, in Lexington, Tennessee at the age of 70 years, 3 months, 12 days.
He is survived by two sons, Bart Browder and wife Kendra of Gallatin, Tennessee, Blake Browder and wife Shannon of Nashville; mother, Dortha Browder Naylor of Bethel Springs; a brother, Jeff Browder and wife Mary Lu of Clarksville, Tennessee; two grandchildren, Kellen and Mills Browder; companion, Marsha Milam of Lexington, Tennessee; and a host of extended family and friends.
Services were held on Sunday, Sept. 19, at 1 p.m., at Shackelford Funeral Directors in Selmer with Blake Carroll and Coach Michael Stroup officiating. Burial followed in Clear Creek Cemetery at Selmer.