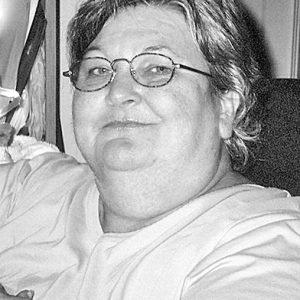 Jerri Sue Dykes Durham, of Nashville, formerly of Savannah, was born on April 18, 1954 in Rogersville, Tennessee, the daughter of the late Lester Larry and Mary Sellers Dykes.
Jerri previously worked for Garen’s for several years as a supervisor, Savannah Manufacturing as a seamstress, and Cross Country as a seamstress before retiring. She loved to sew, paint, cross stitch, and crochet. Her greatest love was her children and grandchildren and she cherished the time she spent with them.
Jerri Sue Dykes Durham departed this life on Friday, June 18, in Nashville, at the age of 67 years and 2 months.
She is survived by her son, Chad Durham and his wife Latonya of Savannah; daughter, April Spoon and her husband Timothy of Burnsville, Mississippi; sister, Phyllis Dyer of Rogersville, Tennessee; brother, Larry Dykes of Surgoinsville, Tennessee; and two grandchildren, Gage Durham of Savannah and Cayden Spoon of Burnsville, Mississippi.
In addition to her parents, Jerri was preceded in death by her sister, Jo Anne Short; and brothers, Charles Dykes, Jakie Dykes and Ricky Dykes.
Services were held on Tuesday, June 22, at 1 p.m., at Mt. Zion Cemetery in Savannah with Timmy Keen officiating. Burial followed in Mt. Zion Cemetery in Savannah.