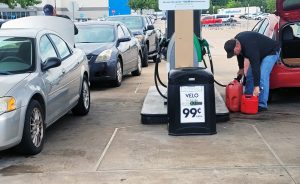 While gasoline prices haven’t seen a large increase in Tennessee, the effect of the Colonial Pipeline shutdown has been felt as more consumers have headed to gas stations throughout the Southeast.
“We have seen overnight, throughout the Southeast, an increase in gasoline demand,” said Megan Cooper, public relations and government affairs consultant for AAA. “It’s people hearing the news and buying.
“We are urging people against panic buying of gasoline,” she said.
The average price of gas in Nashville on Tuesday afternoon was $2.78 a gallon and $2.71 a gallon in Knoxville. Cooper said that was a 4- to 5-cent increase in Nashville and around 2 cents through the rest of the state. The national average was $2.99 a gallon.
Cooper compared the fuel situation with the supply of toilet paper at grocery stores at the beginning of the COVID-19 pandemic, when there was not a toilet paper supply chain issue but consumers significantly increased how much they were purchasing.
Tom Kloza, the head analyst for Oil Price Information Service, agreed, saying the frenzied behavior of the public buying four to five times the amount of fuel they had been purchasing has led to thousands of gas stations in the region running out of fuel. He laughed that his many warnings over the past week against overbuying, unfortunately, haven’t had an impact.
Kloza believes the price increases were related more to a slight bump in wholesale prices last week rather than the Colonial Pipeline ransomware attack. He sees the slight price increases and supply issues continuing through the week before the situation is resolved.
“(Georgia and Tennessee) represent the ground zero of the manic crowd behavior,” Kloza said. “This was triggered by the Colonial Pipeline outage but it’s been exaggerated by panic behavior that has happened afterward.”
The Colonial Pipeline runs through the Southeast and has stub lines from its main hub in Atlanta that run to Chattanooga, Knoxville and Nashville. It also supplies airports in Nashville, Atlanta and others in the Southeast.
Kloza doesn’t believe there will be issues at those airports, but he believes the airlines will adjust to ensure more planes fuel up when they are in other areas of the country instead of in hubs such as Atlanta, where Hartsfield-Jackson International Airport usually carries only three to fives days’ worth of fuel supply.
In a release posted Monday, the FBI confirmed Monday the pipeline was subject to a Darkside ransomware attack. The pipeline said in a statement it hoped for operations to be back substantially by the end of the week.
“The (President Joe Biden) Administration is continually assessing the impact of this ongoing incident on fuel supply for the East Coast,” White House Press Secretary Jen Psaki said in a statement. “We are monitoring supply shortages in parts of the Southeast and are evaluating every action the Administration can take to mitigate the impact as much as possible.”
If the shutdown continues, Cooper said, supply issues could develop in some areas of Tennessee, but it’s important to remember the impact will be temporary and there is not a fuel supply issue in the U.S.
“Panic buying can only make that worse,” Cooper said.
Some of the smaller lines connected to the pipeline, such as one that runs from North Carolina to Maryland, is functioning manually. Kloza believes some of those arterial lines that connect first might be to the airports.
Before the past week, Kloza said the U.S. was seeing a 10% to 15% decrease in demand for gasoline compared with 2019. He said about 235 million gallons of gasoline were in storage before the recent four-day rush and the reserve supply has gone down 10 million gallons since then.
“Gasoline futures have barely done anything,” Kloza said. “We are going to be OK.”