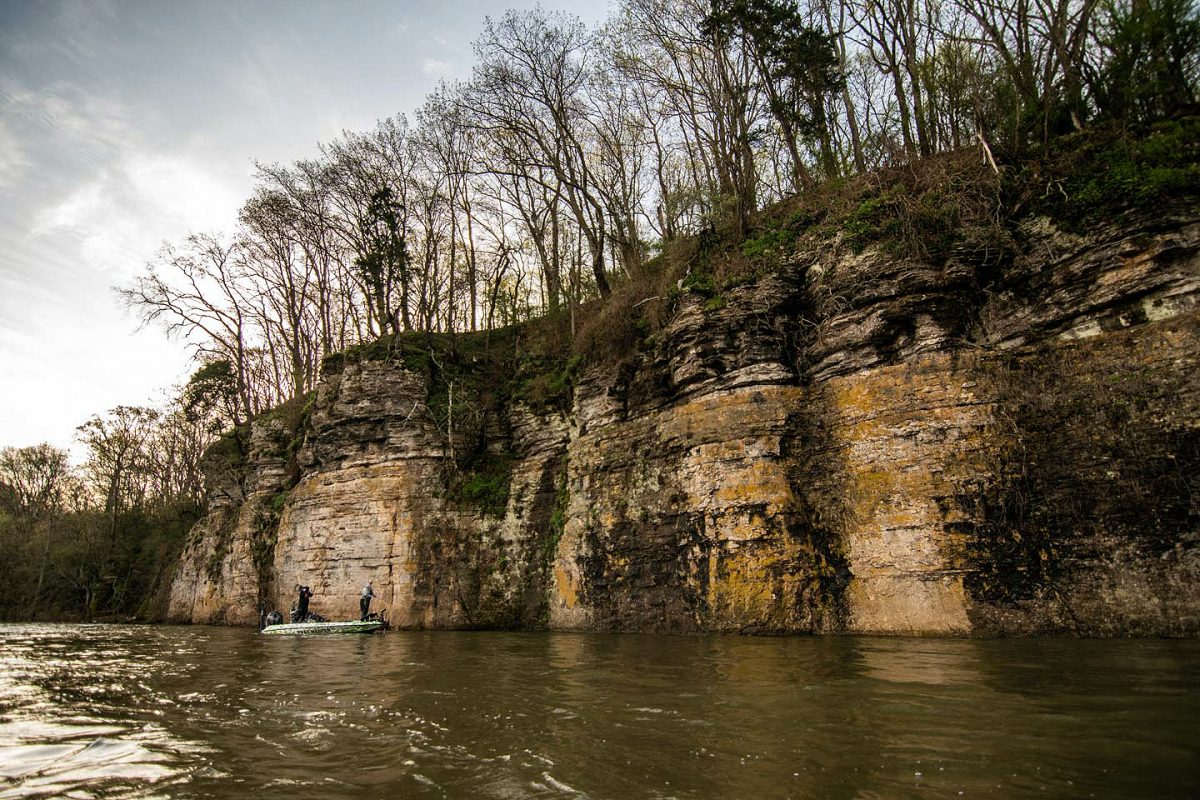 Pickwick Lake is the site of the Basspro.com Bassmaster Central Open, April 29-May 1, 2021.

Spring conditions have slowed Pickwick Lake’s seasonal progression, but Bassmaster Elite Series pro Justin Atkins believes that could bode well for anglers competing in the Basspro.com Bassmaster Central Open.
Hosted by the Hardin County Convention and Visitors Bureau, competition days are April 29-May 1 with daily takeoffs from Pickwick Landing State Park at 6 a.m. and weigh-ins each day at the park at 2 p.m.
Making his home in Florence, Alabama, site of the season’s third Elite event, Atkins has called Pickwick his home waters for the past seven years. Keeping close tabs on this TVA reservoir, Atkins notes that the year started with a temperamental mood.
“We’ve had a really strange (year) with a lot of high water; it’s been cold — it’s still cold,” Atkins said. “I was home last week after the Elite on the Sabine River and it was 40 degrees every morning.”
As Atkins explained, a sustained warming trend could trigger a massive spawning wave and advance bass through their seasonal cycle. Conversely, a cold spell could further delay the party.
“We’re right in the middle of a situation where, if a couple of things happen, one (pattern) is going to take wide open; or, if a couple things happen another way, another deal could be way better. It could change during practice or the first day of the tournament.
“The guy that wins that tournament will be on his toes and keeping up with daily fish movement. There’ll be a lot of ways to catch fish, but the guy that pays attention and stays on a movement of fish and finds that right class of fish will be the one that wins.”
Water level is always an integral element for Tennessee River impoundments and, while recent weeks have seen dramatic fluctuations, the Central Open field will not have to deal with the extreme conditions that plagued the Elite event held mid-March from Florence’s McFarland Park. The flooding and high current that postponed that event’s start by two days created challenging conditions with significant fish repositioning.
“The lake has gotten down, it flooded again since (the Elite event) and now it’s back to normal pool — they (the TVA) suck it in and out pretty quickly,” Atkins said. “After the Elite event, the water got a foot or two deep in the parking lot at McFarland Park. It’s back down now and they’re really not running any current.”
A week prior to the Central Open, Pickwick stood at approximately 413.75 feet, just a few inches shy of normal pool. Average hourly inflows and outflows were around 25,000 to 27,000 cubic feet per second.
All this to say that Pickwick Lake — one of the most productive TVA reservoirs — could be primed for a spring explosion. Habitat diversity — offshore bars, islands, points, bluffs, shallow vegetation, rocks, docks, numerous spawning pockets — will offer plenty of opportunity.
“There should be fish doing a lot of different things,” Atkins said. “It’s actually the perfect time of year to have an Open because you’ll have fish on the bank, you’ll have fish out deep, you’ll have fish up at the (Wilson Dam) tailrace up at the north end and you’ll have fish getting caught all the way down in Tennessee.
“There’ll be a lot going on and that should really spread people out. You may have some shad spawn going on, you’ll have some fish on beds, and the potential for some to be out deep is always a possibility.”
Despite the low current levels, the Wilson Dam tailrace feeding Pickwick will remain a viable option. We won’t see the perilous flows that inundated the islands and bars of the area’s famed Horseshoe, but that doesn’t eliminate the underlying attraction of deep, cool water.
“The tailrace always plays until May,” Atkins said. “Those fish just live up there; they spawn up there, they feed up there. Until the summer months when they go postspawn, those big smallmouth just live up there and guys will figure out how to catch them one way or another.”
So, will there be any standout patterns? Any potential game changers? Certainly possible, but Atkins said it will all come down to meteorological variables.
“Normally, a shad spawn or those deeper fish are playing by this point, but the water isn’t even to that 70-degree mark where you’re going to have that (major) shad spawn,” said Atkins, who plans on fishing the tournament. “That may not even be a player; I really don’t know.
“It’s going to be interesting to see what becomes the dominant deal because it could be any one of the three stages of the spawn, depending on how the weather turns out. Guys will catch them a lot of different ways and it will be really fun.”
Noting the likelihood of largemouth and smallmouth segregating for spawning purposes, Atkins said he expects fewer mixed bags than the Elite tournament saw. That being said, Pickwick holds whoppers of both flavors, so anglers could excel with either.
“To win this three-day tournament, it will take 65 pounds,” Atkins estimates. “To make the Top 10 will take 17 a day. Somebody’s going to have a big bag one day and then back it up with some high teens.
“Now, if there are no fish out deep, and the spawners are hard to catch, and there’s no shad spawn, I could see 53 to 55 win. But if one thing or another goes right — if the spawners are really good or if the shad spawn really takes off or a guy finds a big wad of fish out deep — it could take a really large bag.”
The full field will compete the first two days before the boater side is cut to the Top 10 anglers for Championship Saturday. The co-angler champion will be crowned after the Day 2 weigh-in. Coverage of the event will be available at Bassmaster.com.