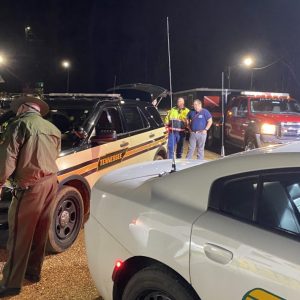 Hardin County law enforcement and fire department personnel are on the bank of the Tennessee River in Shiloh tonight after a vehicle plunged into the water near a popular restaurant shortly before 7.
“I was just at Hagy’s for dinner and a man in a silver minivan purposely drove into the river at a high rate of speed. As he sank he waved goodbye to people in the parking lot,” a woman told The Courier in a private message Friday.
At the scene, Hardin County Fire Chief Melvin Martin said that according to witnesses, it appears the incident is no accident, and that a person in the vehicle did not get out before it sank.
Rescue personnel are doing what they can, but “it’s probably too dangerous to put divers in the water at night with the flood stage,” he said.
Hardin County Sheriff Johnny Alexander said rescue boats are in the water, and the Tennessee Highway Patrol is currently investigating the incident as a motor vehicle crash.
“It looks like the guy just came rolling down the road and never even checked up — just went right into the water,” he said.
Witnesses at the scene said the driver was waving at them, Alexander said.