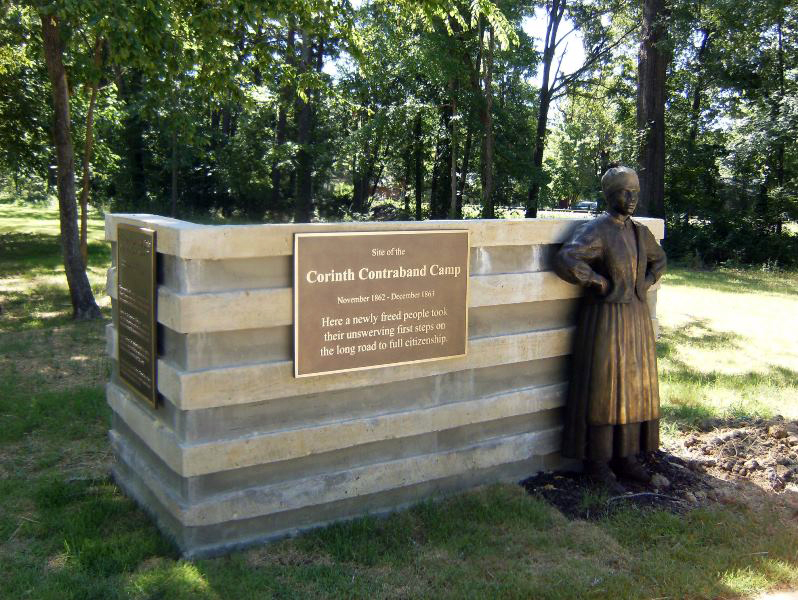 A monument at Corinth Contraband Camp

The National Park Service is presenting a special program about the Contraband Camp in Corinth, Mississippi.
On Tuesday, March 9 at 11:30 a.m., Park Ranger Tom Parson will share the history of the Contraband Camp and focus on members of the Guy family who fled from bondage in Tuscumbia, Alabama, to the safety behind Union lines at Corinth.
According to the National Park Service, once at the Contraband Camp, former slave Henry Guy enlisted in the 1st Alabama Infantry, African-Descent, which became the nucleus for the 55th United States Colored Troops. Guy would serve through the remainder of the war, and following his discharge, attempt for years to receive a military pension from the United States Government for his service.
Parson will discuss the pension process and information on the hundreds of Guy descendants who meet annually for a reunion in Memphis.
The Corinth Contraband Camp was established in the fall of 1862 as hundreds of escaped slave families found their way to Corinth.
By mid-1863, the camp resembled a small town complete with a church, commissary, hospital, and framed log houses. A school was established, military aged men joined the Union Army ranks, and older folks farmed crops and sold cotton and produce on the open market.
The program takes place at the Contraband Camp at 800 North Parkway St. in Corinth.
Those attending are encouraged to bring a brown bag lunch. All COVID mitigation protocols will be followed, and masks will be mandatory if social distancing is not possible, the Park Service said.