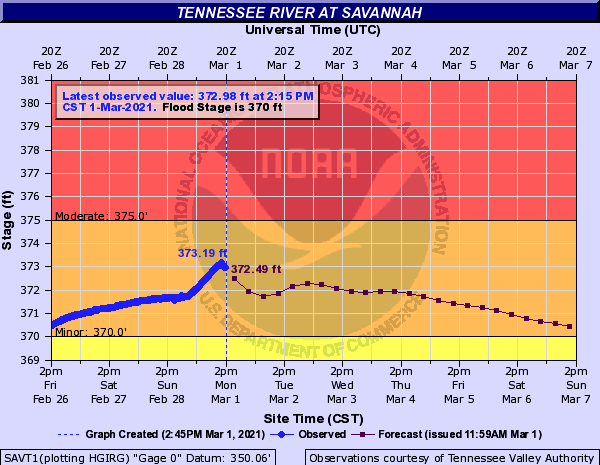 After reaching flood stage Friday, it looks as if the worst has come, the river has crested, and the Tennessee Valley Authority is beginning to ease flow rates through the Pickwick Dam and allow river levels to fall, officials say.
“We were dealt a favorable hand this time. Observed rainfall was a little less than was forecast,” Monday said Darrell Guinn, operations support manager at TVA’s River Forecast Center in Knoxville.
He added, “Rainfall was considerably lighter than forecast in the east, which is a good thing. In west Tennessee and north Alabama, we got 2 to 4 inches.”
Guinn said the weather system, which TVA predicted last week to stall over the Tennessee Valley, actually moved a little north.
That movement spared cities on the Tennessee River from worse flooding, but did drop 6 inches across north Tennessee and Kentucky, causing additional flooding on the Cumberland and Ohio Rivers.
The current flow rate at Pickwick Dam reached a peak of 170,415 cubic feet per second as of noon Monday, which put the river at Savannah at a flood crest of just over 373 feet above sea level.
Guinn said TVA is lowering the flow rate through Pickwick Dam about 15,000 cfs over the next couple of days to about 155,000 cfs, which will still leave the river at Savannah just above minor flood stage at 370 feet above sea level.
He said TVA expects to maintain that flow rate through next week, in an effort to clear water accumulated through both the rain storms over the last couple of days and runoff in the northeast from the ice and snow storms a couple of weeks ago.
Sustained water flows through Pickwick Dam of about 155,000 cfs through next week means the river level at Savannah will remain in minor flood stage, around 372-373 feet above sea level, through the end of this week. It is expected to fall back below flood stage – which is 370 feet above sea level – sometime into next week.
That forecast is dependent on the cooperation of the weather; additional rainfall may force TVA to again increase water flow through the Pickwick Dam, which would cause the river at Savannah to rise.
At the moment, however, Guinn said TVA isn’t forecasting more rain that would cause that problem.
“The best date I’ve got right now (for Savannah) to possibly be below 370 is March 8, but that’s dependent on rainfall – but it looks favorable. We might get a shower or two, but it doesn’t look like more and hopefully that remains the case,” Guinn said.
Guinn also said TVA has been working in concert with the U.S. Army Corps of Engineers to control flooding along the Ohio River at Paducah, Kentucky where the Tennessee River flows into the Ohio River, and Cairo, Illinois where Ohio meets the Mississippi River. The Corps manages the flow of the Ohio and Mississippi Rivers, while TVA manages the Tennessee River.
The Corps has asked TVA to increase the flow rate now through the Kentucky Dam, to clear water before flows from the rain event to the northeast reach Paducah.
“Cairo is a complicated area, with several rivers coming in – (the Corps) see flows coming over the next couple of days from the northeast, so they want us to move water now through the Kentucky Dam in anticipation of those expected flows that are coming, very similar to what we did last week at Pickwick,” Guinn said.