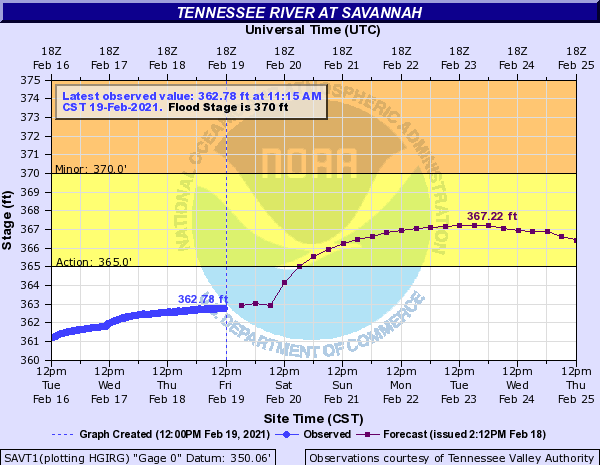 As temperatures start to rise, melting all the snow and ice that has fallen over the last week, the Tennessee Valley Authority cautions that the Tennessee river will be rising and flowing faster.
The good news, said TVA spokesman Scott Fiedler on Friday, is that the river at Savannah is no longer forecast to reach flood stage – but it is predicted to reach action stage, with a peak elevation of 367.2 feet above sea level just after midnight Wednesday morning.
A few days ago, the river was expected to hit or slightly exceed the flood stage of 370 feet at Savannah by Monday or Tuesday.
“Luckily, Mother Nature was kinder than we thought she might be, and we didn’t get as much rain as expected. What fell over the last couple of days came in the form of frozen precipitation – snow and ice – which will run off slower,” Fiedler said. “That, along with our River Forecast Center actively moving water ahead of and throughout this event to try to manage it safely, will allow us to keep you guys below flood stage.”
Fiedler cautions that flows through Pickwick Dam will still be higher than normal over the next several days, so the river will be higher and moving faster than normal. TVA advises that anyone on or around the river stay alert and take all possible safety precautions.
The higher flow rates through Pickwick Dam are expected to last throughout next week.