(Ed. note: This story was originally published in the print edition on Oct. 8.) 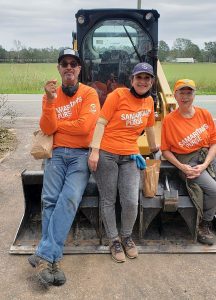 Rick and Bonnie Cerezo of Adamsville and Leslie Wilson joined Samaritan’s Purse in order to help those in need and “be the hands and feet of Christ.”

Living through the scariest windstorm of their lives on Oct. 26, 2019, many people were caught off guard. A rare tropical cyclone uprooted hundred-year-old oaks and peeled back roofs. In the aftermath, Hardin countians were in shock there was only one death from the extreme weather. Property damage, however, was extensive.
When Samaritan’s Purse, an evangelical Christian humanitarian aid organization, contacted authorities in McNairy County to see if their help was needed, they were told of the thousands of trees down and power out, not only in McNairy, but in Hardin County as well.
Samaritan’s Purse provides aid to people in physical need as a key part of its Christian missionary work.
“I first saw a truck with the label Samaritan’s Purse as it drove into the parking lot of Love and Truth in Adamsville,” said Rick Cerezo, who was unlocking the church early Sunday morning. “The man asked if I was the pastor. I said ‘no, but I can call him.’ That’s all I did at first.”
Scott Melson, pastor at Love and Truth Church, met with members of Samaritan’s Purse who were looking for a church to partner with. The large parking lot and facility at Love and Truth were used to create a staging location for relief work teams during the three weeks of clean up in the aftermath of the cyclone. Around 300 homes were helped in the disaster clean-up.
“My wife Bonnie and I are originally from New York,” said Cerezo. “We moved to Adamsville in June 2018, looking for a change of pace.”
On the actual day of the cyclone the Cerezos were out of the country, on a mission trip to Belize.
They were part of a team building playground equipment at a government sponsored school, and putting up a chain-link fence around the property.
“We got home a week later, and the devastation was horrible,” said Cerezo. “We live in a subdivision call Shady Oaks and most of the oak trees were down. Thankfully, our home was safe.”
Cerezo is a construction site manager at Mast Construction and Remodeling in Adamsville and Bonnie is a homemaker. Both of them joined Samaritan’s Purse.
“We removed trees and put tarps on damaged roofs at no cost,” said Cerezo. “We gave a Billy Graham Bible to each of the people we helped with signatures and messages of hope from those of us who worked on their property.”
A Billy Graham Bible is a regular King James Bible with a special section at the back with the 50 most frequently asked questions to Christian evangelist Billy Graham and the Bible texts he used to support his answers.
The president of Samaritan’s Purse is Franklin Graham, son of Billy Graham. The name of the organization is derived from the New Testament parable of the Good Samaritan.
Samaritan’s Purse helps anyone, but prioritizes work requests to help the elderly, widows and single parents, then uninsured and others.
“After we saw the giving spirit, the kindness of neighbors helping neighbors, we’re ‘all in’ to living in the south,” said Cerezo.
Cerezo and Bonnie said they enjoy “paying it forward because of what Samaritan’s Purse did for us” so much that they have been on three additional disaster relief sites in the past year – DeSoto County, Mississippi, January 2020; Mt. Juliet/Nashville, March 2020; and Foley, Alabama, September 2020.
“When we first get to a disaster, the same despair we see on their faces is the same despair we felt after the cyclone. Then as we start to do clean up, the same joy we see on their faces is the same joy we felt when Samaritan’s Purse showed up,” said Cerezo.
Love and Truth Church has recently been asked to continue their partnership and become a Lighthouse Church for Samaritan’s Purse.
“We received a Disaster Response Vehicle, to use locally and to deploy to disasters in other states when needed,” said Melson. “Rick and Bonnie have been very involved in deployments last year and continue their involvement, along with another member of our church, Jenny Choate.”
“For those who have never gotten their storm damage cleaned up from last year, call us to help,” said Cerezo. “We would be honored to be the hands and feet of Christ.”
For more information on Samaritan’s Purse, call Love and Truth at 731-249-0534.