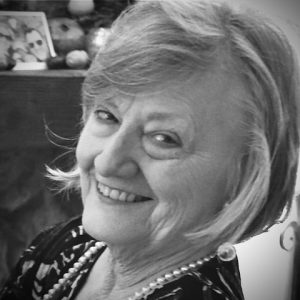 Judy Ann Falls McGinley died peacefully of natural causes in Palm Springs, California, on Monday, Sept. 21.
She was born in Memphis on April 5, 1942, the daughter of the late William Burnett “W.B.” Falls Sr. and the late Melissa Lucile Bowen Falls, sister of the late William “Bill” Burnett Falls Jr.
Born to a family of devoted educators, Judy proudly attended Hardin County schools where she was a talented basketball, tennis and softball player. She was a great dancer and once won first place in a dance competition at Peppermint Lounge in Miami Beach with her brother Bill.
Judy was an equally active student, graduating co-valedictorian of her senior class, and was also elected homecoming queen. She went on to attend the University of Tennessee (UT), Knoxville, where she was a proud member of Zeta Tau Alpha sorority and served as secretary of the UT Associated Student Body.
After graduating, Judy taught high school English, drama, and speech for several years at Hardin County High School. Additionally, she worked for the state of Tennessee as a vocational rehabilitation coordinator. Judy volunteered as chairperson for the Savannah Planning and Zoning Commission, seeking to preserve Savannah’s historical character. She was additionally very active in First Presbyterian Church and served as church elder and clerk of session.
During this time, Judy spearheaded the campaign to restore the church’s exterior, interior, historic windows and roof.
Judy was actively involved in her children’s schools and extracurricular activities. She served as a Cub Scout den mother, PTO president, and put many miles on her car driving her children to various activities throughout the Southeast. Judy enjoyed reading and was a member of the Savannah Book Club. During her last 10 years, Judy split her time between Savannah and Palm Springs, California. She loved film and television and volunteered for both the Palm Springs International ShortFest and the Palm Springs International Film Festival—she enjoyed attending small panel discussions and events with award-winning directors, screenwriters, and actors. She loved wintering in the California sunshine, spending much of her time with her friends and children, and playing with her beloved granddaughters.
Judy was preceded in death by her daughter, Melissa Kerr McGinley, her brother William “Bill” Burnett Falls Jr., and her parents William Burnett “W.B.” Falls Sr., and Melissa Lucile Bowen Falls.
She is survived by her husband, Frank Bingham McGinley Jr., her children, Frank Bingham McGinley III and Judy Ann McGinley, and her two granddaughters, Ebba and Ingrid Freer McGinley.
In lieu of flowers, the family requests donations to St. Jude Children’s Research Hospital or to First Presbyterian Church of Savannah.