A lawsuit has been filed to keep Confederate Gen. Nathan Bedford Forrest’s bust in its place of honor on the second floor of the Tennessee State Capitol.
The Tennessee Division of the Sons of Confederate Veterans, Joe Johnston Camp 28, the group that raised funds to place the Forrest bust in the Capitol in 1978, filed the lawsuit against the Tennessee Capitol Commission and the state of Tennessee. 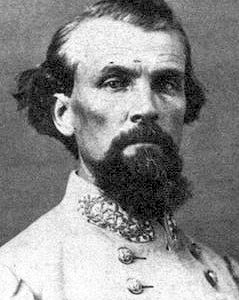 The complaint, filed Monday, argues the second floor of the state Capitol is controlled by the speakers of the House and Senate, and, as such, the Capitol Commission does not have jurisdiction or authority to remove the bust. Because the bust was placed by an act of the Legislature, the plaintiff argues, it would take an act of the Legislature to remove it.
“The Forrest bust and its placement were directed by legislative action and can only be altered by subsequent direct legislative action,” the complaint reads.
After years of controversy, the State Capitol Commission voted last month to remove the Forrest bust from the Capitol and place it in the Tennessee State Museum. The proposal prevailed in a 9-2 vote. Both opposing votes were cast by legislators representing the House and Senate on the commission. Both said they voted according to a private poll of their respective members.
The matter now rests with the Tennessee Historical Commission for consideration.
“Symbols matter. Proclamations and statues are not just snapshots of our history, they are a window into what we value,” Gov. Bill Lee said in July before the Commission voted to remove the bust. “Forrest represents pain, suffering and brutal crimes committed against African-Americans, and that pain is very real for many of our fellow Tennesseans as they walk the halls of our statehouse and evaluate how he could be one of the just nine busts elevated to a place of honor and reverence.”
Forrest was a slave trader, a general in the Confederate army and an early leader of the Ku Klux Klan. Forrest was the commanding officer at the 1864 Battle of Fort Pillow in Henning, where more than 200 union soldiers, mostly Black soldiers, were killed after attempting to surrender.