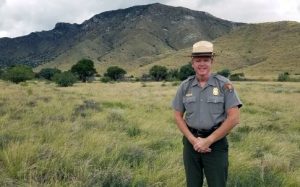 National Park Service South Atlantic-Gulf Regional Director Stan Austin announced Wednesday the selection of Allen Etheridge as the new superintendent of the park in Hardin County. Etheridge begins his new assignment on Oct. 11.
“Allen’s expertise in conservation and historic preservation will be critical to the long-term stewardship of Shiloh National Military Park,” Austin said. The park “will benefit substantially from Allen’s commitment to engaging broader audiences and gateway communities. I am pleased to welcome Allen back to the South Atlantic-Gulf Region.”
Etheridge is a 30-year National Park Service veteran who started his career as a seasonal park ranger, largely in the southeast and southwest.
“I am deeply honored to accept this remarkable opportunity to serve as the superintendent of Shiloh National Military Park,” said Etheridge. “The actions that occurred at Shiloh and Corinth and the resulting narrative is still relevant in today’s national dialogue. It is especially humbling to help preserve the hallowed ground and place of honor of the national cemetery. I look forward to working with the staff, partners and local communities in promoting and protecting these special places.”
The National Park Service said that since 2015, Etheridge has served as superintendent of the Southeast Arizona Group, consisting of Chiricahua National Monument, Coronado National Memorial, and Fort Bowie National Historic Site in Cochise County, Arizona.
His permanent assignments include service at Assateague Island National Seashore, Everglades National Park, Natchez Trace Parkway and Big Bend National Park and Rio Grande Wild and Scenic River.
Etheridge, a U.S. Navy Reservist, is a graduate of the Federal Law Enforcement Training Center and Middle Tennessee State University, where he earned a bachelor of science degree in social science. Etheridge and his wife, Shanna Ramsey, are pleased to return to their home state of Tennessee and enthusiastic about connecting with local communities, NPS said.