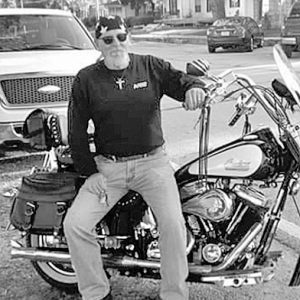 Perry Lee Guyton, of Shiloh, entered this world on July 10, 1957, by way of Rock Island, Illinois, the son of James Edward and Margel Joan Shadden Guyton. Although he spent his childhood and many of his adult years in that area, he never finished high school there, opting to get his GED instead. Eventually he became a peace officer with the Green Rock Police Department, a position he held for 14 years before leaving to become a machinist for various railroads, one of which was National Railroad in Silvis, Illinois. Perry was a man who was loved by many, whether family, friends or co-workers. During his time as one of Green Rock’s finest, he was a favorite with his fellow officers, probably because of his willingness to help anyone who might need it. That trait wasn’t a result of his career in law enforcement but rather an indication of the man he was. It didn’t matter who you were or what need arose, Perry would give whatever he could and expect nothing in return. He was a hardworking man, one that never wanted a handout and, even after he was forced to take disability, still worked whenever he could. Eventually he moved to Shiloh, to a small plot of land he could call his. There he built his own one room cabin, a project he was still working on when he died. Fiercely proud and independent, Perry never wanted to be a burden to anyone. He loved his Indian motorcycle, riding it as often as he could until his failing health interfered—but that didn’t keep him from enjoying being with his family and friends. As a matter of fact, one of his final wishes was that no one should cry over him. They simply needed to have a party instead. Perry Lee Guyton slipped away somewhat unexpectedly on Thursday, July 9 —one day before his 63rd birthday. He leaves his two sons, Michael David Guyton of Colona, Illinois and Caleb Guyton of Davenport, Iowa; his two brothers, Michael James Guyton of Moline, Illinois and Rickie Don Guyton of Red Hill, Pennsylvania; and three grandchildren, Destiny Ann Guyton, Griffin Guyton and Isaiah Guyton. In addition to his parents, Perry was preceded in death by his brother, Terry Edward Guyton. No services to be held.