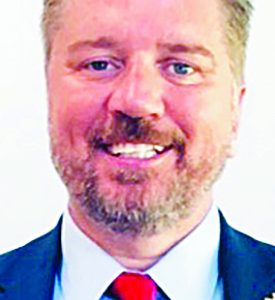 Local lawyer Terry Dicus is running for the Republican Party nomination to the U.S. Senate in the Aug. 6 election.
Dicus leans on his Christian faith to explain why he’s seeking the office.
“The Bible tells me that I am an ambassador for Christ; I speak for him until he returns. He loves us, He would do it all again and there is nothing that would make Him happier than to end war, racism and religious persecution, and expose the unscientific fairy tale that everything came from nothing,” Dicus says.
Dicus has created a 10-point platform that he’s signed and had notarized as an affidavit. Planks include supporting President Trump, requiring a balanced budget, fighting corruption, a healthcare solution, ending racism and fighting election fraud, among others.
“I’m concerned that we never get what we think we’re getting or what we expected to get with candidates. That’s why I created an affidavit – so I’m bound by what I say I will do, and if anyone catches me doing something other than what I’ve promised, I would be guilty of perjury,” Dicus said.
A former investigator with seven years experience at the Jackson Police Department and Hardin County Sheriff Department, then a Tennessee Bureau of Investigation Agent for seven years, and now a private attorney for seven years, Dicus says the decision to run was difficult to make.
“The toughest decision I’ve made so far was to leave the TBI, because they were like my family. When I left, they threw me a big going-away party and presented me with a framed copy of the U.S. Constitution, which hangs on my law office wall and I cherish,” Dicus said.
“The second toughest decision I’ve ever made is to run for Senate, because I love my life as it is right now – but I’m doing it, because I think someone needs to stand in the gap for this land.”
Dicus says he knows he’s at a distinct disadvantage to other candidates in the race, for a couple reasons. For one, he refuses to accept any campaign contributions in his fight to end election fraud, wanting to avoid any appearance of impropriety or the thought that campaign cash could sway his vote in Congress.
Second, as a practicing environmentalist, he refuses to put up campaign signs. He believes it’s important to care for one’s community and environment, by reducing trash and litter and recycling where possible.
Explaining his environmental beliefs, Dicus said, “I would never put signs up around my community or all over the state. Hollywood tells everyone they have to practice environmentalism, but not themselves. I practice it myself several ways, but primarily by renovating abandoned houses, making that existing material useful to others.”
He added, “I have bought 30 houses and fixed them up for renters in need of housing, because there is a huge need for rental properties in this area. I don’t tell others how to live or practice helping our environment, I do it myself.”
Dicus says he supports President Trump in part due to Trump’s opposition to the North American Free Trade Agreement. Dicus said NAFTA effectively ended the garment and other industries in the Hardin County area and cost jobs.
“My mother worked at Garan Corp. for 10 years, and I worked there for three summers. As soon as greedy Republicans and corrupt Democrats like Joe Biden got into office and passed NAFTA, it was closed. Same as Aqua Glass and many other local industries. You can’t have a free trade agreement with a nation that has $1 per hour minimum wage,” Dicus said.
He added, “Trump got rid of every bit of that – he’s the only president since NAFTA that has cared about the American people, so you’d better believe I support him.”
Dicus is also angry over Trump’s impeachment, saying, “I think we need more law men in Congress. The biggest crime I’ve seen committed was the impeachment of Donald Trump, for something I did for 14 years in law enforcement; collaborating with other jurisdictions outside of mine on investigations – and Donald Trump is the nation’s chief law enforcement officer.”
As a graduate of University of Tennessee at Martin with a degree in criminal justice and political science, Dicus went on to earn a master’s in business administration from Union University before law school.
He credits former Hardin County Sheriff Sammy Davidson with much of his career and educational accomplishments, saying, “If it weren’t for him, I probably never would have gotten on at TBI or went to law school. He’s been my mentor and one of my biggest inspirations.”
If elected, Dicus says he will keep his local law office open, so people can stop in to discuss concerns or issues.
“I asked a good friend who’s a Democrat, why he’s a Democrat. He said he’s a Democrat from the days of Jimmy Naifeh and Randy Rinks, when if you picked up the phone and asked them for help, they’d help you. That’s the kind of Republican I plan to be – if anyone calls me and needs help, I will give it to them, if it’s at all legally possible,” Dicus said.