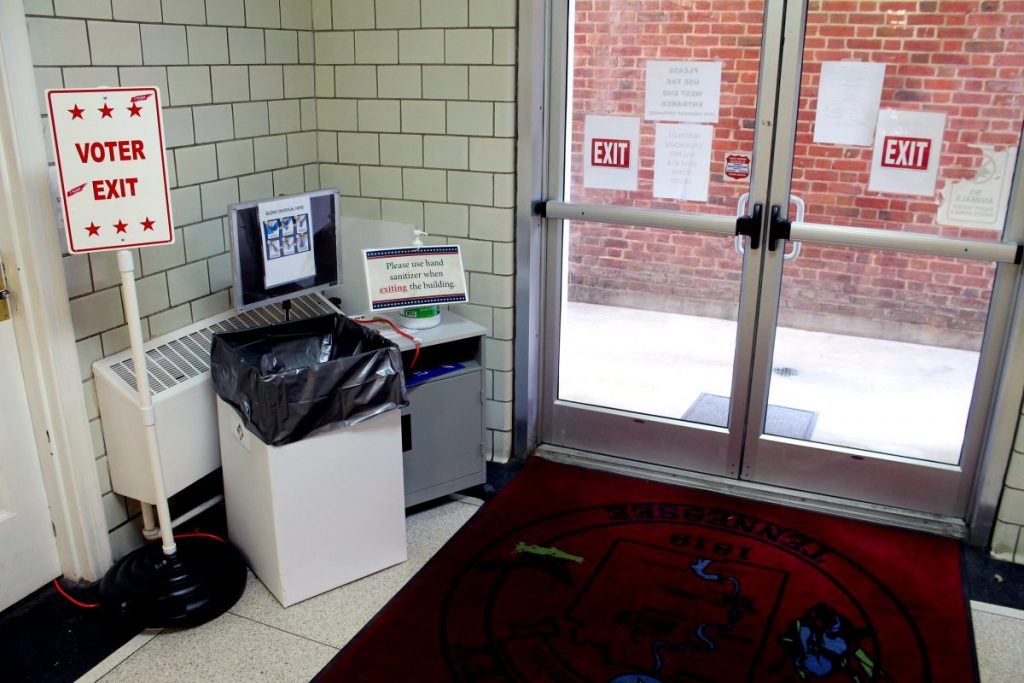 Hand sanitizer and a bin to dispose of complimentary rubber gloves and pens are ready for use at the exit of the polling site.

Early voting in the Aug. 6 state and federal primary and county general election starts Friday and runs through Saturday, Aug. 1.
Due to the pandemic, early in-person voting will be held at the wide basement floor hallway of the Hardin County Courthouse instead of in the small adjoining Election Commission office.
The early voting site can be reached by the outside stairs on the west end of the courthouse. Handicap access is via the elevator. Medical experts are urging that elevators be avoided if possible to lessen the spread of COVID-19.
A “Health Alert” sign has been posted, cautioning voters not to enter if they have any of the listed symptoms of the disease.
Voters with symptoms or who have tested positive for COVID-19 can park in the spaces behind the courthouse reserved for voters. Call 731-925-3375 and a poll worker will bring a ballot out to you, according to the local election commission.
In-person voters are asked to wear a mask and observe social distancing while voting. To help ensure safe hygiene practices, all voters will receive their own pen and glove, as well as the traditional “I Voted” sticker.
Early in-person voting hours are Mondays, Tuesdays, Wednesdays and Fridays from 9 a.m. until 3:30 p.m., Thursdays from 9 a.m. until 6 p.m. and on Saturdays from 9 a.m. until noon.
For those wary of voting early in-person due to the COVID-19 crisis, on June 4, a Davidson County judge ordered that in addition to the previously valid reasons a Tennessee voter can request and vote on an absentee ballot, two more reasons must be added: those who have or fear catching COVID-19 and those caring for a person who has COVID-19.
Hardin County Administrator of Elections Jeanette Cronise said that as of Monday afternoon, the county elections office had mailed 225 applications for absentee ballots – an over 10-fold increase of the 21 absentee ballots requested in the last similar election in August 2016.
The deadline for the Hardin County Election Commission to accept absentee ballot requests for the Aug. 6 primary election is July 30, but voters should note completed absentee ballots must be received by the elections office by election day to be counted. Cronise advises requesting, completing and mailing absentee ballots as soon as possible to avoid possible delays that may result in your ballot not making it in time.
The election on Tuesday, Aug. 6 is the State and Federal Primary and County General Election, where party nominated candidates will be chosen for U.S. Senate, U.S. House of Representatives District 7, Tennessee Senate District 26, State House of Representatives District 71.
Voters selecting a Republican ballot will also select a State Executive Committeeman for District 26, with Johnny Bellis as the only name on the ballot in that race.
On the general ballot in the Aug. 6 election, voters will choose a chancellor of the 24th Judicial District between Savannah attorney Ben Harmon and Paris attorney Vicki Hodge Hoover, as well as Hardin County commissioners for Districts 4 and 7, with only Glen Spencer and Shane McGee, respectively, running for those seats.
Also on the general ballot are Calvin Hinton, the sole candidate for assessor of property, and Carter Horton for the Road Board District 1 seat, Hugh L. Gresham for the Road Board District 2 seat, Bobby Tucker for the School Board District 1 seat, Justin Johnson for the School Board District 3 seat, Olga Turnbow for the School Board District 5 seat, William “Ron” Ashe for the School Board District 7 seat, and Lonnie R. Miller for the School Board District 9 seat. All are unopposed.
Also, voters will also have a judicial retention question, whether to retain or replace Carma Dennis McGee as Judge of the Court of Appeals, Western Division.
For more information or to request an absentee ballot, call the Hardin County Election Commission office at 731-925-3375, or visit www.sos.tn.gov/products/elections/absentee-voting, which includes a link to download an absentee ballot request form.