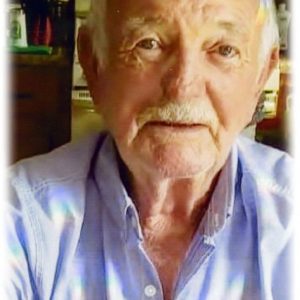 Arnold “Arnie” B. Crotchett, Jr. departed this life on Thursday, June 4, at the age of 85 years, four months, and 26 days. He was born in Rockbridge, Illinois on Jan. 9, 1935, the son of the late Arnold B. and Mabel Evelyn Tucker Crotchett. On Sept.  27, 1958, he was united in marriage to Dorothy Meldrum, who survives.
Arnie served his country honorably in the United States Army from 1955 through 1957. He was a industrial engineer for Owens Illinois Glass in Alton, Illinois for 36 years. Arnie was a member of Westlake Country Club in Jerseyville, Illinois and the Carolina Trace Country Club in Sanford, North Carolina. He was an outstanding woodcarver, talented oil and acrylic painter, and loved to play golf, especially on the Tennessee State Park golf courses. He was an avid fisherman, and loved being near Pickwick Lake and the Tennessee River.
Arnie is survived by his wife, Dorothy (Dottie) Meldrum Crotchett of Savannah, Tennessee; children, David Bruce Crotchett and his wife Silvana of Grumolo, Italy, and Cynthia Jane Lewis of Pocahontas, Tennessee; grandchildren, Danielle Hargis, Brandon Hargis, and David Bruce Crotchett, Jr.; great grandchildren, Rebecca Hargis and Jacob Arnold Hargis; and sisters, Doris Darr and Sandy Goshorn, both of Jerseyville, Illinois.
In addition to his parents, Arnie was preceded in death by his sister, Marsha Crotchett; and brothers, Richard Crotchett, Robert Crotchett, and Eugene Crotchett.
Services and burial will be at a later date in Carrollton, Illinois.