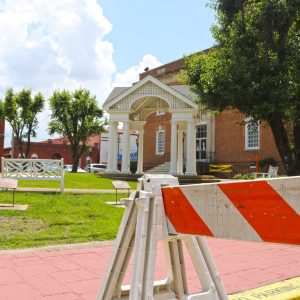 Court Square at the Hardin County Courthouse in downtown Savannah

UPDATE– For video of the event, go to: https://www.facebook.com/CourierAnywhere/

INITIAL STORY– A rally is planned in Savannah Friday afternoon following the death of George Floyd in a violent encounter with Minneapolis police.
In a statement, the Savannah Police Department said it is “aware of a planned peaceful protest… around 5 p.m. on the Court Square in downtown Savannah. The Savannah Police Department supports all citizens’ First Amendment right to peacefully redress the government, and stand in protest of injustices. All members of the Savannah Police Department swore an oath to protect the Constitution of the United States, and therefore will work diligently to ensure that the right to a peaceful protest is not infringed upon.”
At least four downtown Savannah businesses are closed today as the time for the expected rally approaches, including one which cleared out its inventory. Others are closing early.
Across the U.S., rallies and protests – some of which devolved into violent riots – have occurred since Floyd’s death on May 25. Video of the incident shows Floyd, a black man handcuffed face down, pleading that he can’t breathe as a white officer presses his knee on his neck for nearly nine minutes.
Two independent autopsies found Floyd’s death to be a homicide. The Minneapolis police chief fired all four officers involved, who had responded to a complaint from a business that Floyd tried to pass a fake $20 bill.
One of the former officers is now charged with second degree murder and three are facing charges of aiding and abetting second degree murder.
“We watched a murder on TV. If you don’t see something wrong with that, something is wrong with you,” said one downtown Savannah merchant.
The Savannah Police Department said also in the statement that although there are “uneasy feelings” in the local community, “we fully anticipate a peaceful event that could serve as a catalyst of unity within our city. Our officers will be in the area, along with officers from the Hardin County Sheriff Department, to help ensure both the safety of those participating in the event, but also the safety of those in neighboring areas.”
The Tennessee Highway Patrol said it will have troopers in the area.
The city police department said also that “there may be some who stand in opposition to this event, and we humbly ask and ardently discourage those individuals from attending in order to maintain civility, formality, and allow those in attendance to peacefully protest.”