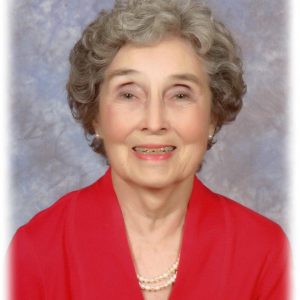 Dorothy Maxine Davis Jerrolds was born Dec. 21, 1923 on Hardin ‘s Creek in Hardin County to Mamie Christian Davis and Farris Davis. She was united in marriage to James Spencer Jerrolds on June 29, 1941.
Dorothy was a member of East End United Methodist Church for 70 years. She loved sewing, making clothes, and things for her home. She was a wonderful cook and kept her home spotless. Dorothy was avid reader and a fan of the Atlanta Braves and St. Louis Cardinals. She was adventurous and loved to travel, visiting many foreign countries, riding an elephant in Thailand, and kissed the Blarney Stone in Ireland. While on a trip to England with Linda, they took a bus to Stonehenge. When they arrived it was pouring rain, she looked at Linda and said, “I didn’t come this far to sit on the bus!” So, they got off and walked over Stonehenge in the driving rain.
Dorothy worked with her husband at Ace Hardware. She was the bookkeeper and greeter. She could tell you where every item in the store was located. Customers loved to talk with her as she sat on her stool at the cash register. When she was around 90 years old, she decided she needed to spend less time working and more time at home. Every afternoon, she would attract a crowd of birds and squirrels who would circle around her on her driveway as she pitched them her homemade biscuits; and if they were lucky, fortune cookies from the Golden Dragon. “Momma Dorothy” shared her love of nature with her grandchildren, showing them the little hard-shelled beetles and critters that lived under the bricks lining the flower beds in her yard. In her later years she adopted an abandoned cat named Bootsie who was her devoted friend and companion.
Dorothy was known for her wit, it was common for her to say things like, “Wait a minute!”, “Whatever”, “Good grief”, “Enough is enough already” and “It will all work out all right”. Her grandson, Spencer, remembers Momma Dorothy as a progressive thinker after the many conversations they had while he stayed with her. She was always busy, never idle, never wasting time. She was sweet, kind, and wise.
Dorothy departed this life on Saturday, May 30 at the age of 96.
She is survived by her children; Linda Jerrolds Talbott and husband Mickey of Savannah, and son David Spencer Jerrolds and wife Susan Diane of Savannah; sisters: Billye Jean Skelton of Waynesboro, Mary Lewis Stricklin of Collinwood, Tennessee; and brother-in-law, William K. Jerrolds of Mendenhall, Mississippi; grandchildren; Sandra L. Talbott of Savannah, Dr. James Robert Talbott and wife Lisa of Kingston Springs, Tennnessee, Leigh Ann Jerrolds Vinson of Savannah, Jane Marie Jerrolds of Olive Branch, Mississippi, and Spencer Forest Jerrolds of Nashville, Tennessee; great grandchildren, Isabella and Cruz Vinson of Savannah; and many nieces and nephews.
Dorothy was preceded in death by her parents and husband.
Memorial donations may be made to: East End United Methodist Church, 104 N. Fairground St. Savannah, Tenn. 38372
Private Graveside Services were held on June 3, at 3 p.m. at Jerrolds Cemetery in Savannah, Tennessee, with Thad Calton officiating. Burial followed in the Jerrolds Cemetery at Savannah.