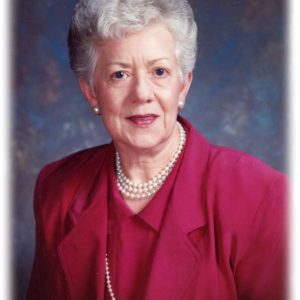 Cordia M. Gann was born in Hardin County, Tennessee on July 15, 1930, the daughter of the late James Albert Rose, Sr.. and Eva Nora Hill Rose.
On Nov. 8, 1947 she was united in marriage to Loy Gipson Gann, who preceded his wife in death on Dec. 6, 1982.
Cordia worked as a bookkeeper for the Hardin County School System from 1968 until her retirement in 2002, where she was working for Hardin County Middle School.  After her retirement she loved to travel and spend time with her grandchildren.  Cordia was a member of East End United Methodist Church for 65 years, , where she taught the Stricklin-Mabry Sunday School Class for 50 years. She was a past Worthy Matron of Eastern Star.
Cordia departed this life on Wednesday, May 20, in Savannah, at the age of 89 years, 10 months and five days.
She is survived by her daughter, Phyllis McDaniel and husband Donnie of Savannah;  grandchildren, Chris McDaniel and Charles McDaniel and his wife Meredith; great grandchildren, Jack McDaniel, Selby Ann McDaniel, Mary Charles (Charlie) McDaniel and Judd McDaniel; great niece and nephew, Kristina Bragg and husband John, and Clark Allen Rose and wife Kristie; great great niece and nephew, Katherine Bragg and J. B. Bragg.
Cordia was preceded in death by her parents, James and Eva Rose; husband, Loy Gipson (Shine) Gann; brother, James Albert (Jr.) Rose and his wife Gladys, and nephew, Clark Rose.
Services were held on May 28, at 1 p.m. at Memory Gardens in Savannah, Tennessee,  with Thad Calton officiating. Burial followed in the Memory Gardens.