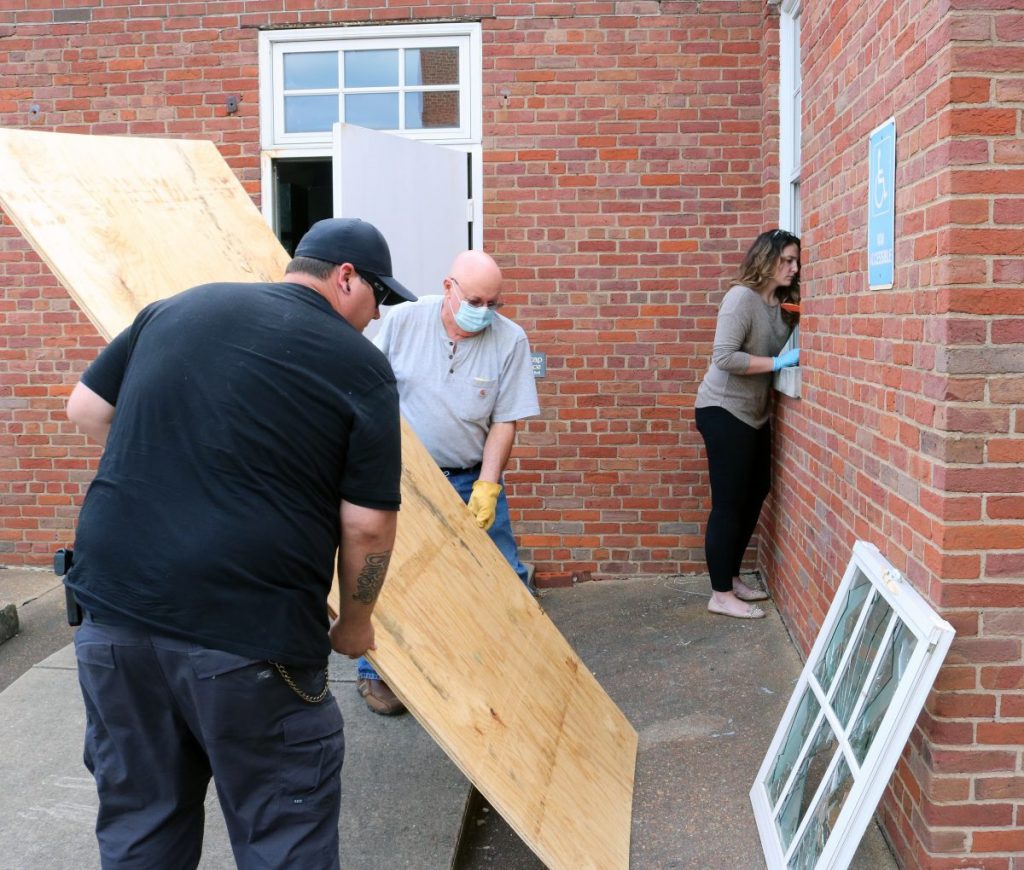 Hardin County Animal Services Director Chris Sykes and county Solid Waste Director Randy Etheridge maneuver a piece of plywood as DeLaney Timberman, executive director of the local Chamber of Commerce, looks into the opening where a deer jumped into the museum building. The broken window is in the foreground.

A deer jumped through a rest room window and toured the Tennessee River Museum in Savannah on Thursday afternoon before being caught and released by police and animal control.
The cut and bleeding doe, which Hardin County Animal Services Director Chris Sykes estimated weighed 120 pounds, ran through the lobby and display areas, but caused no injuries to county staff or other damage to the facility.
The building on Main Street in the heart of downtown is home to the Hardin County Convention and Tourism Bureau and also houses the local Chamber of Commerce.
Tourism Director Beth Pippin said when she heard the noise, “I thought one of the displays had broken and was worried somebody had fallen. About the time we rounded the corner, the deer met us at the bathroom door.”
DeLaney Timberman, the chamber’s executive director, said she “jumped up on the counter to get away from it” and the deer leaped across the counter.
“She jumped higher than the deer,” said Pippin.
Half a dozen staff members and employees were reportedly in the building at the time, but no visitors. It took around 30 minutes before the deer, which officers tried to calm with a table cloth over its head, could be safely removed.
Sykes said the deer, which had some injuries to its nose from breaking the window, was taken to some woods and released in accordance with Tennessee Wildlife Resources Agency policy.
He said responding to incidents involving deer isn’t unusual for him, but “a deer in the building is kind of crazy.”