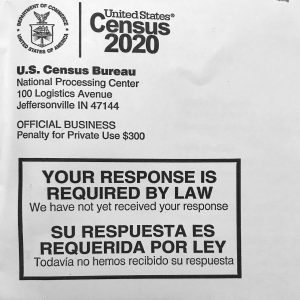 The U.S. Census Bureau said Tuesday that in coordination with health officials, it is beginning to drop off 2020 Census questionnaire packets at front doors of households in Hardin, Humphreys, Perry, Decatur and Wayne counties this week.
Hardin County is seriously lagging in its response rate to the census so far, as detailed in a story in this week’s print edition of The Courier. (Click the link to support community journalism by subscribing, and get instant access to the complete online edition and archives: https://bit.ly/3c8c6RG)
The Census Bureau will deliver 2020 Census invitations and paper questionnaires at the front doors of roughly 5.1 million households nationwide including 1,800 households in the Tennessee River Valley.
This operation is also known as “Update Leave” and is done in areas where the majority of households do not receive mail at their physical address. The Census Bureau said it began hand-delivering census materials on March 15, but suspended all fieldwork for this operation on March 18 due to the COVID-19 pandemic.
According to the Census Bureau, about 5% of households are counted in the Update Leave operation, where census workers will confirm or update a household’s physical location address and then leave a census questionnaire packet. This operation attempts to ensure a complete and accurate count of all communities, which helps guide hundreds of billions of dollars in public and private sector spending per year.
The Update Leave operation does not require interaction between households and a Census Bureau employee and follows current federal health and safety guidelines. Temporary field staff have also been trained to observe all social distancing protocols and will wear official government-provided personal protective equipment for their safety and the safety of the public, the Census Bureau said.
The Bureau asks that people respond promptly to the 2020 Census using the ID number included in the questionnaire packet. Responding with a census ID or the paper questionnaire helps ensure the best count of their community. People can respond online, by phone or by using the paper form in the packet.