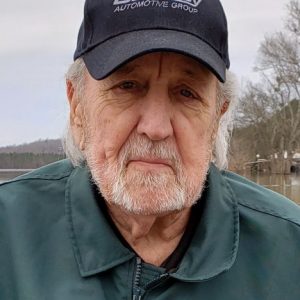 Jack Lancaster Coffman was born Dec. 12, 1940, in what is now the oldest house in Adamsville, Tennessee; the son of the late John Wesley and Jimmie Lancaster Coffman.
He was united in marriage to Deborah Bias, on April 11, 1998.
Mr. Coffman graduated from Adamsville High School and attended the University of Tennessee at Martin.  He served his country honorably in the United States Marine Corps and was the longest tenured member of Adamsville First United Methodist Church.  Jack was the former owner of Jack Coffman Chevrolet in Adamsville, and also worked as an automobile wholesaler.  Collecting cars and telling Buford Pusser stories were two of his favorite pastimes; he was especially fond of the Chevrolet Corvette.  Jack also took an active part in the Buford Pusser Home and Museum in Adamsville.
Mr. Coffman departed this life on March 30, in Adamsville, Tennessee at the age of 79 years, 3 months, 18 days.  He is survived by his wife of 22 years, Deborah (Bias) Coffman of Adamsville; two daughters, Chasteti Plunk of Adamsville, and Melanie Reaves of Savannah;  a stepson, Jon Ross Reaves and wife Angie of Selmer, Tennessee; two grandchildren, Kirby Nixon and Anna Grace Nixon, both of Savannah; a great grandchild, Cooper Nixon of Savannah;  a sister in law, Nita Coffman of Adamsville; a niece, Angie Ricketts and husband Chad of Clearwater, Florida; two great-nieces, Blakeley and Riley Ricketts, both of Clearwater, Florida; and many extended family members and friends.
In addition to his parents, Mr. Coffman was preceded in death by a brother, Billy Coffman.
Private graveside services were held on April 3, 2020, at  4  p.m. at Adamsville Cemetery,  with Tony Polk officiating. Burial followed in Adamsville Cemetery.