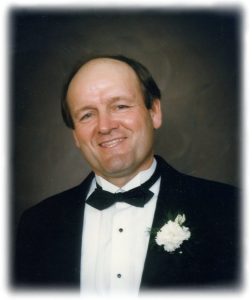 Bobby Stricklin was born in Savannah, on March 11, 1940, the son of the late Jesse Martin and Maudie Mae Ferrell Stricklin.
On March 21, 1964, he was united in marriage to Norma M. Davidson, who survives.
Bobby honorably served his country for eight years in the Army National Guard.  He retired from Memphis Light, Gas and Water where he worked as a pipe fitter. Bobby was a member of Forest Hill Church of Christ and was also a member of IBEW.  In his spare time he enjoyed playing golf, gardening and yard work.
Bobby departed this life on Monday, March 30, at his residence in Collierville, Tennessee at the age of 80 years and 19 days.
In addition to his wife of 56 years, Norma of Collierville, Tennessee, he is survived by his children, Christina Stephenson Barber and her husband Troy of Memphis, Tennessee and Jeffrey B. Stricklin of Collierville, Tennessee; grandchildren, Davis Alex Stephenson, Nicholas W. Stephenson, Blake Walker Stricklin and Emma Katherin Stricklin; sister, Peggy Martin of Memphis, Tennessee; and brothers, Jamie D. Stricklin of Savannah, Fred Stricklin of Savannah, and his twin brother, Willie D. Stricklin of Byhalia, Mississippi.
Bobby was preceded in death by his parents, one sister, Marybelle Stricklin Faulkner and one brother, Wendell Stricklin.
Memorial donations may be made to Page Robbins Adult Day Care, 1961 South Houston Levee Road., Collierville, TN  38017 and Memphis School of Preaching, 3950 Forest Hill Road., Memphis, TN  38125