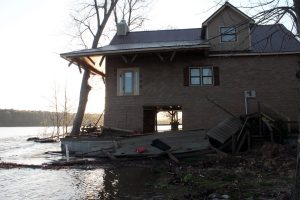 A house on the Tennessee River below Pickwick Dam after it was hit by a barge.

UPDATE, 8:30 p.m. — The Hardin County Fire Department says all the barges are now secured.
INITIAL STORY —Officials with TVA and the Hardin County Fire Department say multiple barges have broken loose from a tug and are headed down the Tennessee River toward the U.S. 64 bridge at Savannah.
A house on Arnold Lane about a mile downstream of Pickwick Dam was hit by one of the stray barges Thursday afternoon and heavily damaged, according to county Fire Chief Melvin Martin.
It appears one or more tugs is involved in the effort to corral the loose barges, which according to the fire chief initially numbered at a dozen or more, he said.
The loose barges are now north of Shiloh National Military Park. Authorities caution that if any pillar of the bridge crossing the river at Savannah is struck by a barge, the bridge must be closed for a safety inspection.