The Tennessee Wildlife Resources Agency announced the Hardin County Fire Department recovered a third body from the Tennessee River on Thursday at about 7 a.m. near Shiloh National Military Park. 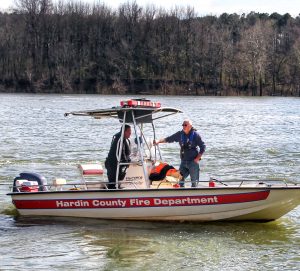 TWRA spokeswoman Amy Snider-Spencer said the body found this morning was recovered in the same area as the two previous bodies. TWRA is the lead investigative agency in this incident.
Hardin County officials close to the investigation said this morning the third body was found by a fisherman, as were the first two bodies, and that an HCFD boat was called to the scene to make the recovery.
The three, who were participating in a fishing tournament, have not been conclusively identified but are believed to be Kenneth Driver, 43, and two 15-year-old boys from Obion County missing since Saturday, Feb. 22.
The three are now known to have passed through a Pickwick Dam floodgate. Their overturned boat was found the morning of Feb. 24, and the first body was recovered Tuesday afternoon. The second was recovered yesterday morning.
The bodies have been sent to Memphis for autopsy and positive identification, and Hardin County has suspended search and recovery operations pending results from the medical examiner’s office.
“We still have to wait until the identities of all three bodies are confirmed by the medical examiner, but we have no reason to believe these are not who we were looking for,” said Hardin County Fire Chief Melvin Martin this morning. “Obviously we hate that the search ended this way, but, hopefully the recovery of their loved ones can help the families find some closure and help them through the healing process.”
At a press conference Wednesday, Spencer thanked all the agencies and volunteers that assisted with the search and recovery operations over the last three weeks, and noted the extensive efforts of the Hardin County Fire Department.
“All the help from all agencies and volunteers has been outstanding, but the efforts of the HCFD were especially above-and-beyond. The HCFD has been out here every single day for 18 days, and their help has been especially noteworthy, and I want people to know that,” Spencer said.
TRWA also recognized the following agencies for their assistance: Sumner County EMA, Decatur County Rescue, Hardin County Sheriff’s Department, Henry County Rescue, Henderson County Rescue, and EMA, Lake County Sheriff, Humphreys County Sheriff, Carroll County Rescue, Chester County Rescue, Samburg Fire Department, Finger Fire Department, Obion County Rescue, Fayette County Sheriff’s, TEMA, TVA Police, and Pickwick State Park staff, Jackson Police Department Aviation Unit, and the Tennessee Highway Patrol helicopter.
TWRA in a news release also thanked the large contingent of volunteers who provided supplies to the search crews and offered support for the family during the search and recovery.