Susan Cordova,  Walnut Grove Community Writer
Many prayers have been going up for 11-year-old Daniel Scott, son of Greg and Selina Scott, who was recently diagnosed with cancer – Hodgkin’s lymphoma, Stage 4-B. 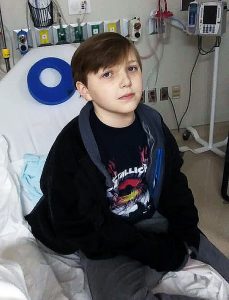 Only a few months ago, life for Daniel was as normal as any other pre-teen boy. Besides attending Hardin County Middle School, Daniel spends much of his time playing with his pets, reading books and playing video games.
His mom Selina noticed Daniel had a decrease in appetite which led to unintentional weight loss, and he became severely fatigued. About the same time she discovered a large a lump on his neck that seemed to have appeared overnight.
She immediately made an appointment for Daniel with his family physician. Although Selina had confidence in her family doctor, she knew Daniel needed specialized care and time was of the essence. He was instantly referred to Le Bonheur Children’s Hospital in Memphis, where he had a biopsy on Feb. 3.
After a three-day wait, Selina received the life altering phone call from her son’s surgeon, informing her that her baby boy had cancer. Although the diagnosis was devastating to the Scott family, there was no time to waste on anything but preparing to fight.
And that is exactly what they are doing.
Daniel lost 17 pounds within a month, but his determination did not waver. He told his mother, “I want to beat this cancer.”
Daniel was referred to St. Jude Children’s Research Hospital for further treatment. After a PET scan and a CAT scan at St. Jude, Daniel was diagnosed with Hodgkin’s lymphoma that started at his neck and spread to his lungs and his chest cavity.
Doctors quickly began chemo that consisted of six daily treatments, back to back. Thankfully, Selina informed me that the knots are starting to shrink.
But during the chemo treatments and other various tests, Daniel has experienced extreme bouts of nausea and vomiting that has left his energy depleted.
After being sent home for rest, Daniel is returning to St. Jude on Feb. 28 to start his second round of chemo. Doctors have informed the family he will also need at least one radiation treatment.
Due to Daniel’s diminished immune system, visitors are limited. For instance, cancer patients who are undergoing treatments are at a higher risk of catching the flu. The Scotts are taking every precaution to protect Daniel for the rough days ahead.
Selina says Daniel’s biggest concern is the fear of losing his hair. After hearing the news about Daniel’s illness, many gracious people sent him caps. So far, he has received close to 100. Daniel is thankful for all the prayers, food, cards, calls, texts and gifts that were sent to him and his family.
He also appreciates those who have joined the “Dan’s Fans” Facebook group. https://bit.ly/395qNU1. He thoroughly enjoys reading all the encouraging posts and looking at the pictures of family pets people from everywhere have posted on the page.
His mom Selina extends her gratitude to all who have been so kind through this difficult time. She along with Daniel and her four other sons – Jacob, 22, Trevor, 20, Lucas, 17 and Brody, 14, are overwhelmed by the love shown to them.
Selina said she apologizes for not getting to respond to each individual post on Facebook. Most of her time is consumed with caring for Daniel.
“He is my main concern right now” she says.
If anyone would like to send Daniel cards, caps or other gifts, the address is 290 Barriertown Drive, Savannah TN 38372.
Daniel also likes Mario games and Legend of Zelda books.
Daniel may be young, but he is a fighter. He is determined to be a statistic among the survivors. What a courageous young man!
The goal is for Daniel to complete all his treatments and have him back in school doing his regular activities within six months.
Prior to his return to school, HCMS Principal Duane Eliff will be corresponding with Selina to keep Daniel up to date on his studies.
Daniel asks that everyone continue to keep him in your prayers. He feels that by doing that he doesn’t fight alone.