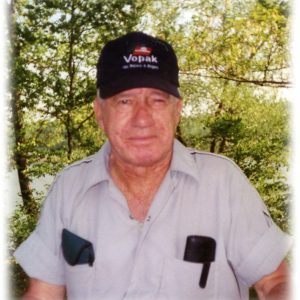 Eugene Rogers, of Adamsville, was born in Cannon County, Tennessee on June 18, 1931, the son of the late Robert and Pearl Parker Rogers.
On Dec. 22, 1956, he was united in marriage to Naomi Ruth Ray, who preceded her husband in death on Oct. 9, 2001.
Eugene served his country in the United States Army, serving in Korea with D Company-10th Medium Tank Battalion.  He spent many years living in Coffee County, Tennessee and moved to Hardin County area in 2000. Eugene worked in maintenance at TVA until his retirement. He loved to talk and take hikes. He also loved old cars and antique tractors.
Eugene departed this life on Friday, Jan. 10, in Adamsville, Tennessee at the age of 88 years, 6 months and 23 days.
He is survived by his daughter, Rhonda Gail Rogers of Savannah; grandson, Jeremy Hulen; great-grandchildren, Fisher Hulen, Gracie Oxley, Naomi Hulen and Michael Hulen; brothers, Henry Rogers of Hatchechubbee, Alabama and Jerry Rogers of Manchester, Tennessee; sisters, Louise Sherrell of Woodbury, Tennessee, Vicky Rigney of Manchester, Tennessee and Christy Deberry of Manchester, Tennessee.
In addition to his parents and his wife, Eugene was preceded in death by one brother, Bill Rogers.
Services were held on Monday, Jan. 13, at 3 p.m., at Shackelford Funeral Directors of Savannah with Chad Balentine officiating. Burial follow in Memory Gardens at Savannah.