Thursday is opening night of The Savannah Performing Arts Company’s production of “The Wonderful Wizard of Oz” with performances running through the weekend. 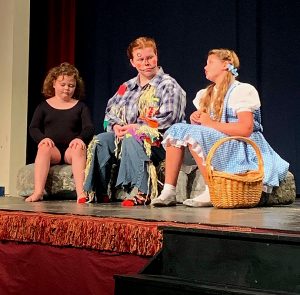 The play is being performed at the Historic Savannah Theater on Court Square, with 7 p.m. showtimes today, tomorrow and Saturday, and a 2 p.m. matinee on Sunday.
Tickets are available at the theater box office one hour before each show time.
This adaptation, written by V. Glasgow Koste and based on the book by L. Frank Baum, tells the basic story of The Wizard of Oz, but as told by the author himself, Frank Baum, who acts as the narrator.
Baum – a welcome and theatrical addition to the story – “stage manages” his story to keep the action brisk from scene to scene. In real life, Baum was an actor, traveling salesman, vaudeville manager and newspaperman – an authentic American gypsy.
And not to worry – the traditional characters and plot are included here.
Swept to Oz on a cyclone, Dorothy joins with the Scarecrow, Tin Man and Cowardly Lion as she searches for home and family.
However, the play is founded upon the idea of creating the world of the Wizard of Oz, in a clearly theatrical environment, where the author himself addresses the audience and explains the reasons he did certain things in the book, and tells about his favorite parts.
“The Wonderful Wizard of Oz” celebrates the importance of mind and heart; courage in facing what is feared, the need to dream, to dare, to ride out storms; the joys of loving laughing, crying, and being lost and found.
Faithful to the original book, Koste’s play creates a fresh framework for Oz. Licensed to SPAC by Dramatic Publishing, the approximate run time is 100 minutes.