To celebrate the anniversary of the film – and because people keep asking them to do it – the Savannah Performing Arts Company is running encore performances of its production of “Steel Magnolias.” 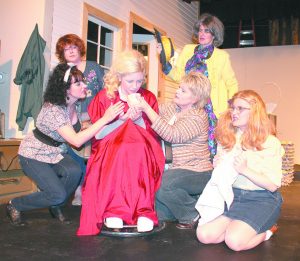 Everyone fusses over Shelby after she’s suffered a fainting spell at the salon. (File photo of cast of 2016 Savannah Performing Arts Company production.)

SPAC first performed the popular show three years ago, to sold-out crowds at every performance, plus two hastily scheduled encore performances. Some audience members boasted of loving SPAC’s production so much they attended every show.
With four of the six original cast who were in SPAC’s 2016 production returning for the upcoming encore, be sure to get tickets early if you want to see the show. The word is that the two cast members who couldn’t make it back are replaced by amazing local talents, who will wow audiences every bit as much as the original two cast members.
“Steel Magnolias” 2019 by SPAC will be at the historic Savannah Theater on Court Square, Thursday through Saturday, July 18-20 and again July 25-27 at 7 p.m., and with matinee performances on Sundays, July 21 and 28 at 2 p.m.
There are many tales of quintessentially “southern” life in America, but perhaps none more heart-warming yet heart-rending than “Steel Magnolias.”
The title suggests the “female characters are as “delicate as magnolias but as tough as steel,” and the magnolia specifically references a magnolia tree they are arguing about at the beginning.
The story is of six women in northwest Louisiana, bonding in a beauty parlor while gossiping on southern life and culture, living through victories and tragedies together, and experiencing all that life has to offer with southern charm and all that embodies.
Quick bit of trivia – Who knew that Steel Magnolias was actually a stage play prior to being adapted as the hit movie of the same name in 1989, and winning the People’s Choice award as Favorite Dramatic Motion picture in 1990?
The play was written by Robert Harling in 1985 as a way to provide catharsis following the death of his sister from diabetic complications.
His story tells of his experience surrounding his sister’s death, and the play had a successful three year run off-Broadway prior to being made into the popular movie.
The two act, 90 minute show tells of Truvy Jones, who runs a successful beauty salon in Chinquapin, Louisiana, where all the ladies in the neighborhood have a standing Saturday appointment.
Along with her anxious and eager assistant, Annelle, Truvy styles the hair of many of the women about town.
There is wealthy widow and former first lady of Chinquapin, Clairee Belcher; local curmudgeon Ouiser Boudreaux (“I’m not crazy, I’ve just been in a bad mood for 40 years”); intelligent and compassionate career woman M’Lynn; and her daughter Shelby, the prettiest girl in town.
Shelby’s engagement is the talk of the town, but the joy and excitement of her wedding quickly turn to concern as she faces a risky pregnancy and a myriad of health complications.
Eventually, when Shelby dies from complications related to her diabetes, M’Lynn has to deal with the most difficult of life’s challenges: the loss of one’s only child.
As the women of Chinquapin make their ways over life’s many hurdles together, they find comfort (and a fair amount of verbal ribbing) in one another. “You have no idea how wonderful you are,” M’Lynn tells the ladies at the end of the play. Truvy responds, with a smile, “Of course we do.” 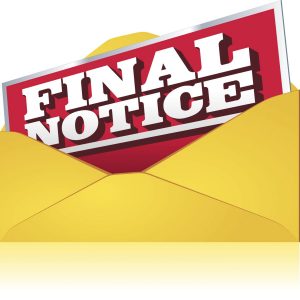 Sign up to be notified when Tennessee rent assistance program opens