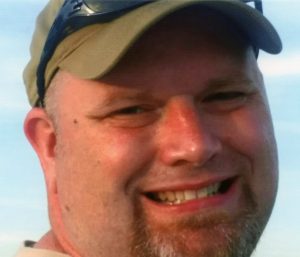 Thad Mitchell, of Savannah, departed this life on Wednesday, June 26, at the age of 41 years, 8 months and 20 days.
He was born in Selmer on Oct. 6, 1977, the son of Patricia Brewer Mitchell and the late Edward H. Mitchell. On July 29, 2005, he was united in marriage to Brandy Harville, who survives.
Thad enjoyed playing football and played from peewee league through his college years at Lambuth University. He was a member of Riverview Baptist Church in Savannah. Thad was a manager at Lowe’s and been with the company for 20 years. He enjoyed spending time with his family and loved watching his girls play sports. He was very active in their lives…a true family man. Thad loved swimming, riding four-wheelers, hunting and reading, but he really enjoyed being a jokester and prankster.
He is survived by his wife, Brandy Mitchell of Savannah; daughters, Eveye Mitchell and Kylie Mitchell, both of Savannah; mother, Pat Mitchell of Savannah; brother, Tim Mitchell of Savannah; sister, Sandy Jerrolds of Savannah; and a host of nieces and nephews.
Along with his father, Thad was preceded in death by his son, Noah Mitchell; and grandparents, Hardin and Dolly Mitchell, and Neal and Earline Brewer.
Services were held on Sunday, June 30, at 1 p.m., at Shackelford Funeral Directors of Savannah with Allen Guyer and Dr. Jerry Spencer officiating. Burial followed in Bethel Cemetery at Savannah.