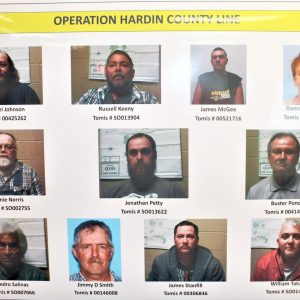 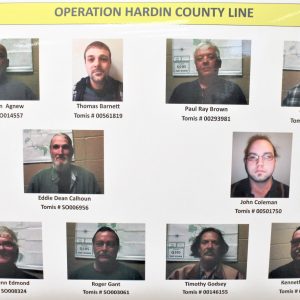 According to Hardin County Sheriff Johnny Alexander, the operation began at about 2 p.m. Thursday and is expected to wrap up some time this evening. Because the arrests and investigations leading to more expected charges happened so recently, individual names or charges are not yet available.
“We have 32 registered sex offenders outside the city limits of Savannah we concentrated on; we’ve still got about six to catch up with, which we will be early this evening,” Alexander said Friday.
The sheriff said that during a compliance check, officers go to the home of convicted sex offenders to make sure they are actually living at the address they’ve registered, and ensure the offender isn’t engaging in illegal behaviors such as illegal drugs or possessing firearms.
“One of the ones we arrested, he recently was in court for noncompliance… and he never showed up after court. He was also giving his mother’s address, but actually lived in a little house on an adjacent property,” Alexander said.
Because the man didn’t comply after his recent court date, a warrant was issued for his arrest, and when officers found his address didn’t match during this current operation, they obtained a search warrant for the home he was actually living in.
“We came back with the search warrant, and found drugs, two firearms, and then two more firearms in a safe we got a separate search warrant to open – so now he’s a convicted felon in possession of firearms and plenty of ammo,” Alexander said.
The other offender who was immediately arrested was also found to be in possession of a firearm, Alexander added.
“We’ve arrested two and have likely charges against two – and there could be additional charges and defendants – but for the most part, those we’ve checked have been cooperative and we’ve had no issues,” said Hardin County Sheriff’s Department Sex Offender Registry Compliance Officer Sheila Franks on Friday afternoon.
“Most of them will hopefully stay in compliance and fly under the radar – we’d like all of them to – but we still have to check periodically; it’s our job to keep Hardin County safe,” she said.