A female inmate at the Hardin County Jail overpowered a female corrections officer Thursday morning, fleeing in the officer’s unmarked patrol car before being apprehended on foot in Decatur County, authorities say.
Hardin County Sheriff Johnny Alexander said that the woman, Sarah Armstrong, 32, of Saltillo, was being held at the jail since Jan. 25 on two counts of child endangerment. Armstrong was charged after her two children, both under 5, tested positive for methamphetamine, he said. A possible motive for her alleged attack and escape this morning may be that the state parole office visited Hardin County yesterday to hold a parole violation hearing for Armstrong on Wednesday.
Alexander said Armstrong was convicted in Lincoln County, Tennessee of aggravated assault, reckless endangerment – and escape – and given a 15 year sentence.
He said records show Armstrong was paroled in December 2014, and the two child endangerment charges might constitute a parole violation resulting in her having to serve the remainder of her sentence. The results of yesterday’s parole violation hearing are pending.
This morning, Armstrong was transported around 8 to a methadone clinic on Harrison Street in Savannah to receive ongoing treatment. Alexander said if a person is already receiving drug treatment at an outside clinic when taken into custody, county policy is they will continue to go there.
Currently, Alexander said, Armstrong is the only inmate receiving such treatment at an outside program.
According to the sheriff, when Armstrong and the 10-year-veteran corrections officer were leaving the clinic, Armstrong made her move.
Alexander said Armstrong was handcuffed at the time, but overpowered the officer, took her keys, removed her handcuffs and got into the officer’s unmarked patrol car. The injured officer continued to struggle with Armstrong, attempting to pull her out of the vehicle, and was dragged a number of feet through the parking lot.
The officer radioed Hardin County E-911, and employees at the clinic who witnessed the incident also called 911. The officer was transported to Hardin Medical Center and released.
The Hardin County Sheriff’s Department issued a be on the lookout notice for Armstrong and the officer’s patrol car to surrounding counties, and area deputies began to search.
Armstrong was spotted by a Decatur County deputy who was headed south on Tenn. 641 as Armstrong traveled north. The deputy turned to pursue, and Armstrong drove off the highway into a pull-off in some woods and continued to flee on foot.
A passing motorist spotted Armstrong, who had shed her orange jail jumpsuit in the patrol car and was now dressed only in a white sports bra, long underpants and socks.
The motorist stopped his vehicle. Armstrong approached him and asked for a ride. When he declined, she went into the woods. The driver called 911 and reported her location and direction of travel.
Decatur County deputies set up a perimeter around the woods and notified Alexander, who went to the scene with his chief deputy, Mike Fielder.
Alexander said a Tennessee Highway Patrol helicopter was en route and he was attempting to arrange for a K-9 search team when Armstrong surrendered without incident to a Decatur County deputy.
Armstrong is currently being held in Decatur County where she is also reported to be facing charges of felony evading, driving on a suspended license and reckless driving. Additional charges in Hardin County are pending. 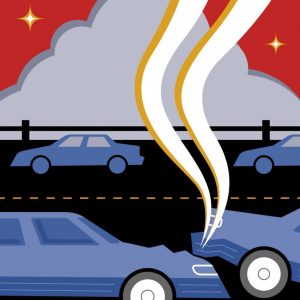