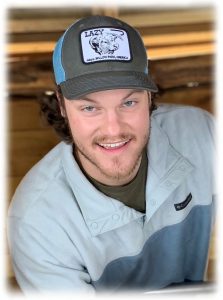 Grant Johnson, of Savannah, was born in Shelby County, Tennessee on Oct. 5, 1995, the son of Larry Mitchael Jr. and Patricia Lynette Linam Johnson.
A 2014 graduate of Hardin County High School, Grant was pursuing his college degree and was a senior at Middle Tennessee State University, where he was a member of the Alpha Tau Omega Fraternity.  Eager to begin working with the family business, he was already serving as an equipment operator for Johnson Construction Company and was co-owner of Machinery Express, a company specializing in equipment sales.
Grant was definitely an athlete, playing football and basketball all four years while in high school; the hand-eye coordination he developed then certainly came in handy when he engaged his friends in on-line gaming with his X-Box.  But he didn’t spend his time glued to a couch while doing battle with his friends.  Grant truly enjoyed being outdoors, hiking or hunting, or being on the water.  He had an affinity for animals, especially his cows—his “little girls” (the heifers) and his “big girls” (the cows) with his favorite being Number Three. Traveling and new experiences were also high on the list of things he enjoyed.  Kind-hearted, compassionate, and a lover of people, no matter their age, Grant served as a mentor and big brother for the youth group at GracePoint Church of Christ where he was a member. His greatest passion was simply loving life, and he lived it to the fullest.
Grant’s life tragically came to an end on Sunday, Feb. 3, at the age of 23 years, 3 months and 29 days.
He leaves the love of his life, Olivia Brett Malone of Iuka, Mississippi, his parents, Mitchael and Patricia Linam Johnson of Savannah, and his sister, Jessica Johnson Mabry and her husband Cory, also of Savannah, as well as his grandparents, Janice Johnson and Eddie and Nancy Linam, all of Savannah. Additional family members include Jane, John and Zachary Tyler, Kerry, Brandy, Lilly and Eli Linam, Randy, Tracy, Ellen and Abby Linam, all of Savannah, Mitzi and Barry Levin of Birmingham, Alabama, Jetta and Riley Johnson of Calera, Alabama, and Brett and Jill Malone of Iuka, Mississippi.
Grant was preceded in death by his paternal grandfather, Larry Johnson.
The family has requested that memorial donations be made to GracePoint Church of Christ Youth Fund at P.O. Box 595, Savannah, Tenn.  38372.
Services were held on Friday, Feb. 8, at 1 p.m., at Savannah Church of Christ in Savannah with David Baker officiating. Burial followed in Memory Gardens at Savannah.