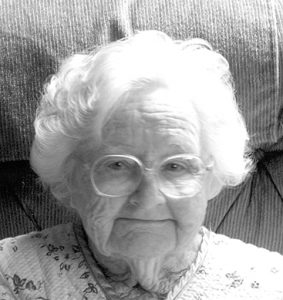 Nona White Shelby was born in Savannah on Aug. 3, 1922, the daughter of the late William Frank and Lillie Austin White. On June 5, 1940, she was united in marriage to Rev. Charles H. Shelby, who preceded her in death on April 1, 2008. From this union they had two sons, Charles Ray Shelby and Tommy Shelby, both of whom joined their father in heaven; along with her brothers, Oscar, Hubert and Homer White; and sisters, Daisy Brock, Reba Gray and Jo Shook.
Nona joined Charlie and their sons in heaven, as she departed this life on Wednesday, Jan. 9, at the age of 96 years, 5 months and 6 days.
She was a wife, mother, homemaker, grandmother, great-grandmother, and an amazing cook. Nona and Charlie enjoyed singing gospel music with the Savannah Quartet for many years, blessing others at local churches and on the W.O.R.M. broadcast. When asked how she wanted to be remembered, Nona said, “I tried to treat others as Jesus wanted me to.”
She is survived by her daughters-in-law, Irene Shelby and Betty Sue Shelby; grandchildren, Chuck Shelby and his wife Mindy of Savannah, Sherry Denise Shelby and father of her children Shane Stacy, both of Florence, Alabama, James Raymond Shelby and his wife Terri of Savannah; special adopted grandson, Travis Ward; great-grandchildren, Levi Stacy and Shayna Stacy, both of Florence, Alabama, Taylor Shelby of Memphis, Harley Shelby of Corinth, Mississippi, Hannah Shelby and Logan Shelby, both of Winfield, Missouri, Shelia Franks, Justin Franks, Austin Franks, Michael Franks, Matthew Franks, Navi Weaver, Ivan Weaver and Cade Smith, all of Savannah, Bruce Weaver of Peoria, Illinois, Zoey Smith and Michael Smith, both of Abbeyville, Alabama; and a special friend, Donald Briley. Nona is also survived by numerous nieces and nephews.
A graveside service was held on Friday, Jan. 11, at Memory Gardens in Savannah with Charles Linam officiating.