Charles Everett Baker Sr. was born in Hardin County on Sept. 6, 1968, the son 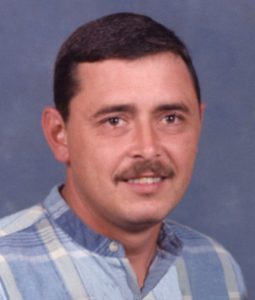 of the late Luther Columbus “LC” and Winnie Jewel Highland Baker.  Charlie, as he was known to everyone, spent his entire life in Hardin County (except for a couple of trips to Corinth and maybe one to Knoxville), graduating from high school there and beginning work with Shackelford Funeral Directors in Savannah in 1990, just a few months before his twenty-second birthday.
Not long after starting work on March 1, he married Tamatha Jean “Tammy” Short on April 3, 1990. Together they were blessed with three children:  their sons, Charles Everett “Charlie” Baker Jr. and Columbus “Dale” Baker, and their daughter, Allie Jewel Baker.
Charlie was dedicated to his family and to his work. When asked what he enjoyed doing the most, the response was immediate — digging graves. He took pride in his profession, laboring through rain and snow, blistering heat and freezing cold, muck and mud to help care for those who had come to bury their loved ones. For more than 28 years, Charlie willingly served the people of Hardin County and the surrounding area as “the grave digger.”
But there were also hobbies — camping, planting the occasional garden, and, once they moved to the country, being an avid deer watcher. He loved to watch them on their property in Olive Hill and, although he was also an avid deer hunter, he never hunted “his” deer. The folks at the funeral home often benefited from his marksmanship. If it had been a good season, homemade biscuits filled with venison appeared in the office first thing in the morning. If it wasn’t venison then it was homemade sausage.  And every so often, he’d remember to give Tammy credit for making the biscuits.
There were a few sports teams that earned his loyalty over the years, mainly the Pittsburg Steelers, the Georgia Bulldogs, and the Atlanta Braves. Watching them play was one of his favorite ways to spend any free time he might find.  But his most favorite way was playing with his grandsons, Eli Braxton Baker and Gunner Swain Baker.
If you ask Charlie’s family to describe him, they will tell you he was a daddy. He was a granddaddy. He was a husband. And he was loved by everyone. His friends and co-workers will tell you he would willingly do anything he could for anyone, no matter who they were.
On Thursday, Dec. 6, Charlie dug his last grave. He worked his last full day and made his last trip home. Sometime that evening, he suddenly and unexpectedly died at the age of 50 years and 3 months.
Other than his wife, children, and grandchildren, he leaves his brothers, Curtis Baker and James “Booger” Baker; and his sisters, Ruthann McCain, Cricket Baker and Laura Lee Ramey.
In addition to his parents, Charlie was preceded in death by his grandparents, Rip and Lillian Highland and Jamie and Cleo Baker.
Services were held on Sunday, Dec. 9, at 2 p.m., at Shackelford Chapel in Savannah with Lloyd Blankenship, Jimmy McGee, Chad Balentine and Charles Everett Baker Jr. officiating. Burial followed in Mt. Hebron Cemetery at Wayne County.